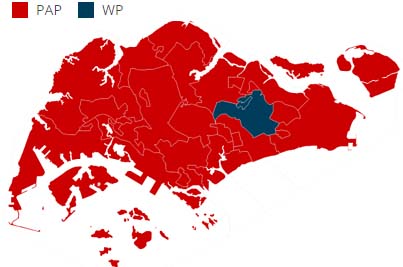 The Singapore version of September 11 is a tragedy comparable to happened at America in 2001. There, jihadists flew jet planes into the North and South towers of the World Trade Center complex in New York City. Here, the ghostly apparition of the horrible person piloted the political machinery into the pillars of our fledgling democracy. That's the guy you saw on state television all week, whose name was invoked ad nauseam in print media as well. If the old goat was still alive, even he would have protested: "Have a care with my name. You would wear it out." (line from Judi Dench as Queen Elizabeth in "Shakepeare In Love")

The dissonance between the popular support at election rallies and the final count at the ballot boxes is evidence something is greatly amiss. Bashar was elected president with 97.29 percent of the votes, slightly less than the 99 percent his father regularly received to confirm his seven-year terms in office, but that is Syria. Asked to comment on the results, Reform Party's Jeyaratnam said the people deserved the government they are getting.

The big question floating in the haze is whether the leader of the Workers' Party would do a Lee Siew Choh. Latter yanked his Barisan Sosialis out of the first post-independence general election in 1968, and allowed the People's Action Party to grab all 51 of the seats in Parliament. Why bother to give credence to the mockery of a democracy when a monopolistic oligarchy is actually in charge?

The citizenry have other options, such as checking out the embassies to find out which country is better for the family they plan to raise. Making their way to Syria for military training is less attractive, the desert is far too hot for comfort. Or simply lie back and think of England Singapore, and the Swiss standard of living promised but will never be delivered. Bloggers should declare a moratorium in disgust.