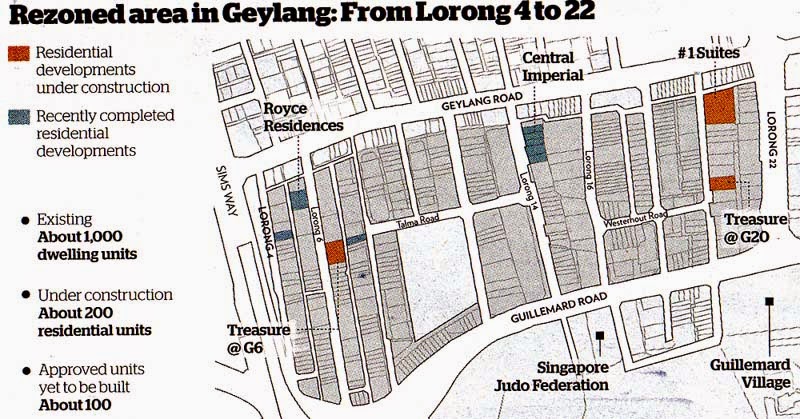 Look, mom, there's a brothel next to our block!

Those moving into their new flat at Sengkang West may think they have it bad because they will be sharing space with a columbarium. Spare a thought for those at the even numbered Lorongs of Geylang, especially the area URA has decided to rezone from "Residential/Institution" to "Commercial/Institution."

The emphasis on commercial over residential considerations is an obvious choice for the Urban Development Authority (URA). Confucius once said "微臣從沒見過 如斯好德如好色的人", which can be loosely translated as "never has the virtuous take precedence over vice". The infamous "Four Floors of Whores" at Orchard Road has always done a roaring trade, whatever the state of the economy. Perhaps something more posh sounding is on the drawing board for the Designated Red Area (RDA) Geylang district, something along the lines of "Skyscraper of Sluts" or "Prostitutes@Pinnacle?"

The outcome is inevitable - URA has weighed in with the overseas funeral parlour developer - but those affected will no doubt still go over the fine print in their signed contracts. Proud owners of residential developments under construction (#1Suites, Treasure@G20, Treasure@G6) and recently completed (Royce Residences, Central Imperial) may not have that much to lose. Sleeping jowl to jowl next to a member of the oldest profession of the world is definitely more desirable than proximity to an urn of ashes.