Drawing The Line For Decency 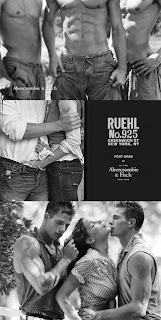 The Advertising Standards Authority of Singapore (ASAS) objected to the Abercrombie & Fitch's (A&F) advertisement at Knightsbridge mall, a larger than life size pictorial of a man's nude torso with his hands tugging at his low-slung jeans. Chairman Tan said, "The general consensus was that the portrayal of the human anatomy had crossed the path of decency because the navel line was very much exposed."

The huge ad covering the entire window of its new store has been in place since April. A&F obviously took maximum advantage of the election fever to sneak in the suggestive picture. The brand name that enthralled the electorate then was Kate Spade. They could have used some of their more explicit illustrations and still not raise an eyebrow. Following 7 May, Singaporeans had to contend with another election, this time trying to tell one Tan (as in the surname, not being bronzed under the sun) from another. Finally, after the ebb of all the excitement, someone noticed the guy with his plumbing equipment threatening to hang out for all of Orchard Road to gawk at.

Apparently the A&F ad was put up by the brand itself, and no local ad agency or production house was involved - or made any money from it. Smart move. It also meant ASAS is rendered impotent to take any action since the Singapore Code of Advertising Practice governing decency applies only to local ad agencies. As a foreigner, it would appear A&F is free to push the envelope with its racy marketing photography by Bruce Weber, characterised by grayscale images and features outdoor settings, usually with semi-nude males and females.

ASAS is now looking for help from the government to remove the ad. Media and entertainment lawyer Seow said only government agencies such as the Media Development Authority (MDA), with the authority vested by the Undesirable Publications Act, are allowed to remove it if it finds that the photographic image exploits human nudity. Chapter 338 draws the line for indecency:


Meaning of obscene
3. For the purposes of this Act, a publication is obscene if its effect or (where the publication comprises 2 or more distinct parts or items) the effect of any one of its parts or items is, if taken as a whole, such as to tend to deprave and corrupt persons who are likely, having regard to all relevant circumstances, to read, see or hear the matter contained or embodied in it.

MDA or the Minister in charge appears to be conveniently incommunicado when queried by the press for their stand. Maybe they too busy tending to another PR headache with the image of Vivian Balakrishnan in close proximity with a cross-dressing gay at his/her coming out celebration. You bet that's gonna deprave and corrupt some person. 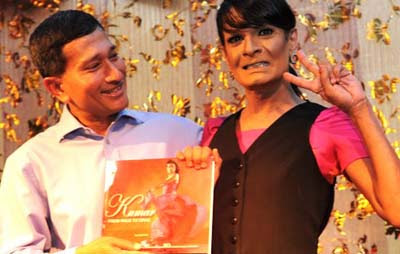