It is often said that Britain and America are "two nations divided by a common language", a quote attributed to George Bernard Shaw. In The Canterville Ghost (1887), Oscar Wilde wrote something similar: "We have really everything in common with America nowadays except, of course, language". ﻿﻿﻿
﻿﻿
﻿﻿ ﻿﻿﻿ Speaking at the official opening of the English Language Institute of Singapore (Elis), Lee Kuan Yew said that he had been consciously switching between British and American English on the computer, and that he saw himself moving towards American English in a nod to the US being "a dominant force". Teachers might thus do well to accept this trend, and teach their students to recognise - and even speak - American English, he said.

Yeah, but did he tell them to master their spelling first?

One of the ways in which American English and British English differ is in spelling. In British usage, some words of French, Latin or Greek origin end with a consonant followed by -re. Most of these words have the ending -er in the United States. The difference is most common for words ending -bre or -tre: British spellings calibre, centre, fibre, litre, lustre, metre, reconnoitre, sabre, saltpetre, sombre, spectre and theatre, all have -er in American spelling.

American English has kept the Anglo-French spelling for defense and offense, which are usually defence and offence in British English; similarly there are the American pretense and British pretence; but derivatives such as defensive, offensive, and pretension are always thus spelled in both systems.

Can you tell if the language experts at www.goodenglish.org.sg are using British or American English? 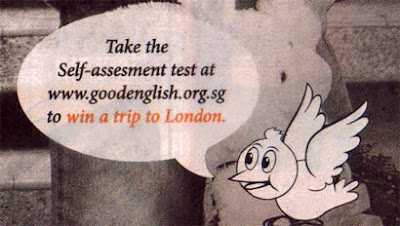