At the Singapore Global Dialogue yesterday with moderator DeAnne Julius, Lee Kuan Yew enumerated the fundamentals of Singapore's success, "One, good governance, anti-corruption, meritocratic, pragmatic. Going forward, if you drop out any of the three factors, you will lose your momentum." Maybe he meant to say "any 3 of of the 4 factors". Or maybe the guy can't count. 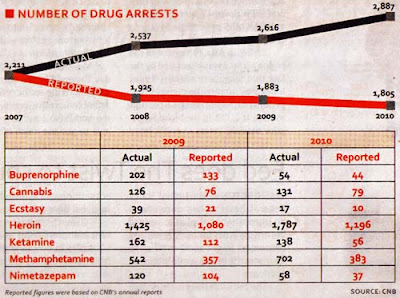 Well, one thing's for sure, the guys at the Central Narcotics Bureau are definitely arithmetically challenged. For 3 years in a row, they got the numbers wrong for drug-related arrests. DPM Teo Chee Hean made the mother of all understatements when he described it as "a serious error." These are the guys who determine the 500 gram limit for cannabis that will or will not send someone to the gallows. German international Julia Suzanne Bohl was saved when laboratory tests proved the amount of pure drugs found in her apartment weighed only 281 grams, less than the 500 required for a neck tie party, but how many have died because of "serious errors" in computation?

Neil Armstrong used a HP-41C (running at 360 kHz) to calculate the descent rate to land on the moon. You can bet the CNB's IT department splurges on more expensive computers with powerful processing capabilities and terabytes of memory that can do a better job. Like highlighting that in 2010, the unresolved cases numbered 1082 (2887 actual - 1805 reported), or 59.9% of the reported cases. That kinda makes them look bad, doesn't it? Like, these guys were sleeping on the job, or evidence of another clear case of incompetency. It definitely can't be the good governance Mr Lee was talking about.

Worse, it could be a cover up inadvertently exposed to the harsh light of day.
Posted by Tattler at 8:51 AM