In the ST Interview with visiting Professor Aneel Karnani from University of Michigan, it was quoted that the Gini coefficient has risen from 0.43 in 2000 to 0.452 last year. That puts the Singapore wage gap second-largest among the world's developed economies according a United Nations report. He said, "The sense I get is that Singapore has focused too much on growing the size of its economic pie and not enough on distributing it."

In presenting the case for more foreigners, Lee Kuan Yew once used the line that a small slice of a bigger pie is better than a big slice of a small pie. This was a variant on the NTUC's 50th Anniversary Dinner speech he gave in May 2011, when he said unionists played a key role in the productivity movement since 1980, deciding on enlarging the pie rather than fight for a bigger slice of a small pie. Here Professor Karnani's analogy of the barber comes in useful. The guy who takes 20 minutes to give a haircut 100 years ago, still needs 20 minutes to complete the task today. For people engaged in similar work, productivity just doesn't rise. These are the folks who will never benefit from polices that grow the economic pie and make the country rich. Unless the government intervene in the markets by introducing a minimum wage, empowering workers to collectively bargain for higher wages, or providing free public-funded services like education or health care.

Dream on. When Mayor Sam Tan announced that the Central Singapore Community Development Council (CDC) has set aside enough funds for a Recession Economic Assistance Package (REAP) to help families with laid-off workers in the forthcoming economic downturn, he was talking only of a 2-month reprieve. And the lucky recipients will have a 2-month wait for the rescue package. Not exactly the kind of cash hand-outs or "conditional transfer payments" the professor was contemplating to temper the social inequality. 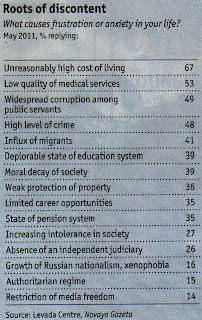 The picture looks real dismal when you reflect on the survey results from the Sept 10th -16th issue of the Economist. Just substitute Russia for Singapore, and the itemised roots of discontent could have been our own. While corruption among civil servants may not be as bad, recent press accounts of confidential information being traded to settle gambling debts may be just the tip of an iceberg. Even the definition of corruption may not stand up to public scrutiny - where else are politicians paid to be honest? The Economist article about the current mood in Russia is titled "Time to shove off". The disillusioned may take it as sound advice.
Posted by Tattler at 2:46 PM