Priority For The Greater Good 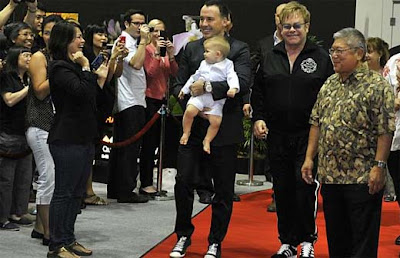 Who would imagine this scene, Singapore rolling out the red carpet literally for a couple joined in gay wedlock. They even named an orchid after him - the "Doritaenopsis Sir Elton John". Elton and his partner David Furnish were similarly attired in track suits, so it was difficult to tell who actually wears the pants in their household. And who changes the baby diapers.

That could be one reason for the big welcome. The message that gays can help boost the population growth statistic without worrying about the bothersome TFR. A colleague had a quick put down for the alternate lifestyle: homosexuals are unnatural because they can't reproduce. Well, it looks like she could be wrong. Baby Zachary makes three.

And if Elton John signs up for a red passport, little Zachary will grow up to play golf at Orchid Country Club in the north and then zip down the spanking new North-South Expressway to Marina Bay Sands for a session at the baccarat tables. He probably will have to choose between a Porsche, Ferrari or Lotus Esprit, that's 3 COEs less for the lesser mortals. That's also one way to double the GDP by 2025.

Too bad the Rochor Centre folks have to be evicted to make way for the grandiose plans. "I hope they understand that their sacrifice is for the greater good, " said their MP Denise Phua. Latter claims to understand that there are residents who are angry with the move, adding, "It's difficult but we have to accept the Government's decision". Way up north, Transport Minister Lui Tuck Yew could not assure the Nanyang Pho Heng association whether their request to move back to their original site after all the dust has settled would be entertained.

Major road works for the NSE project will begin from 2015. Both Lui and Ms Phua should take note that the next election is due in 2016.
Posted by Tattler at 10:02 AM