Some Peace And Quiet Please

The NTUC ad for a new Assistant Director (Service Quality), Membership, requires the candidate to be a person to "delight members, using all available Service Quality touchpoints – including (but not limited) to the Call Centre, Emails, Counters (physical and virtual), Social media".

Which means the former Assistant Director at NTUC Partnership and Alliance failed big time. Barely 24 hours had lapsed after her tactless Facebook posting, which hardly brought delight to members and non-members alike, when Secretary-General Lim Swee Say personally intervened and swiftly axed her to "reiterate that inclusiveness remains at the heart of the Labour Movement.” That was easy, she was small fry, kuching kurak.  Did we hear a single beep out of the legendary Zorro when someone insisted that a minority group should integrate over meals?

She tried to apologise in vain, even set up a Twitter account on the fly for damage control. But the witch hunters were bearing down in full force; even a gallant Zorro would have wet his under garments at the mere sight of the waving pitch forks and flaming torches. And there was the possibility that the tsunami of online vitriol was actually directed at NTUC as a proxy for failed government policies. 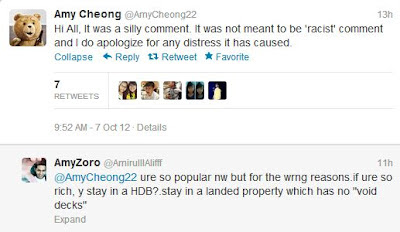 Which is really upsetting because a friend once told me how his egress route from his private estate was blocked because a funeral in progress had a stage erected right in front of the deceased's terrace house unit, instead of the vacant field nearby which other families normally used. The private roadway was good only for two passing cars, which meant he had to navigate precariously between the ostentatious display of wreaths and the tables and chairs arranged for visitors which took up one full lane. Hardly an auspicious way to start off each morning to his investment banking job. The irony was that the apologetic younger bereaved were Christians and did not really subscribe to the traditional ancestral worship rites. But he departed was super rich, which meant the elaborate ceremonies went on for five long days and nights of chants, gongs and other Chinese instruments, including the loud and ear piercing suona (唢呐).

The saving grace was that my friend was not into social media. He unloaded his expletive loaded frustrations onto sympathetic ears over a copious flow of kopi-si - hey, that's what friends are for. Sigh, whether one is rich or poor, whether you stay in a HDB flat or landed property, you can still be the irritant that gets someone's goat.