Willie was a diligent member of our engineering, procurement, installation and commissioning (EPIC) team. He came in useful when we bidded for a mounded gas tank project in Batangas. After the site survey and meeting local subcontractors, he wanted to check on his brother who was running his business, delivering additives for Coca Cola, while he was working in Singapore. For protection on his routes, Willie said they always carried a grenade in the glove compartment. Like most Singaporeans, we were not used to sighting live ammunition outside military installations.

One day Willie was not his usual self at the office. His brother was shot dead in a bar brawl. He was always hot headed, Willie told us. 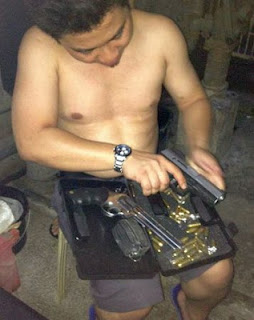 The guy checking out his hardware collection is working at an ice cream outlet here. According to his Facebook CV, he studied at the Management Development Institute of Singapore in 2010, one of many private schools providing education as an excuse to enter the country. He is supposed to be enrolled at Southern Cross University in New South Wales. He also promised to kill all Singaporeans visiting his country ("go to philippines and I will kill u all"). Apparently he is motivated by the defence of another Filipino, a Seagate Techonology employee against whom the firm is "planning to take the necessary disciplinary measures where needed" for an online posting that is derogatory. One Singaporean is so scared by the threat on his life, he has lodged a report at Bishan neighborhood police post (Police Report (NP299) No. E/20121211/2119).

Fortunately for Transport Minister Lui Tuck Yew, Singaporeans are not as emotional or incendiary as hot blooded Filipinos. Writing in TODAY, someone going by the monicker of Avi Liran, a economist supposedly living here for past 15 years, expressed support for the Filipino extremes ("What S'pore can learn from emotional Philippines", pg 14, Fri 14 Dec 2012). Mr Liran doesn't sound very Singaporean.

Hell bent on taxing the threshhold of our emotional limits, Lui (tuck you! tuck you!) expressed determination in his own conflagrative Facebook posting to increase bus fares. Calmer minds at Workers' Party (Aljunied, Hougang and maybe Punggol East) reminded him that "the Government should not assume nor suggest that this cost increase must automatically be borne by commuters." Perhaps, with more foreigners taking up citizenship in line with Government plans, Lui may one day end up with more explosive responses. The kerosene bottle that ruined Seng Han Thong's evening could do worse if it was a Molotov cocktail. Is the minister planning to fiddle while our city burns?