The National Environment Agency (NEA) website was supposed to clear the air about concerns regarding the assessment of the haze danger. It turns out to be another exercise in semantics to cover up their attempts at obfuscation.

To debunk charges that the Pollutant Standards Index (PSI) do not take PM2.5  readings into account, NEA claims "PM10 would also capture what is captured in the PM2.5 readings."

Particulate matter, or PM, is the term for particles found in the air, including dust, dirt, soot, smoke, and liquid droplets. Some particles are large enough to be seen, such as soot or smoke, others are so small they can only be detected with an electron microscope. Particles less than 10 micrometers in diameter (PM10) pose a health concern because they can be inhaled into and accumulate in the respiratory system. Particles less than 2.5 micrometers in diameter (PM2.5) pose the greater health risk, as their small size (approximately 1/30th the average width of a human hair) enable the fine particles to lodge deeply into the lungs.

There has to be good reason for the separate PM2.5 standard, if a PM10 measurement suffices. When NEA says the PM10 count also includes PM2.5 particulates, it is like saying a 6.9 million population is sustainable for Singapore, and miss out on the crucial number of foreigners included in their master plan. Apples are not oranges.

And did Tan Tock Seng Hospital overcharge by pricing the N95 masks at $60 for a box of 20? If not, why did they decide to bring the price down to $50? We bought our "branded" 3M 8210 mask from Watsons at $2.50 per piece, without benefit of quantity discount. Why did a subsidised government institution charge the public an equal or higher price than a private commercial entity? We know they peg ministerial salaries to the private sector, we know they linked public housing prices to the private sector, but N95 masks?

As for the PSI reading of 393 in a screen capture, NEA insists there had been no editing or deleting of the PSI reading on the website. Foreign Affairs and Law Minister K. Shanmugam acknowledged at a community event that with so many air-quality figures, it can be confusing. "Unfortunately, there has been some deliberate misinformation put out in other media sources, I think, in an attempt to confuse people." He said it was not done by the Government, but your opinion may differ. 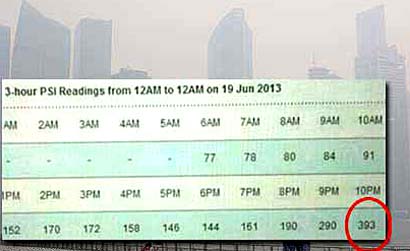