At least the truculent troika of Khaw Boon Wan, Teo Ho Pin and Chandra Das had the smarts to shut up when invited to call in the CPIB if they were not satisfied with the public accounting of the A.I.M. saga. When Vivian Balakrishnan was invited to an opportunity to clear the air about the misunderstandings over the cleaning of hawker centres (not food court or restaurant) in Aljunied GRC, the blustering minister for Environment and Water Resources was true to form. He haughtily demanded action to “clean up the place” and “apologise to the hawkers”, before acceding to meeting Mr Low Thia Khiang over a cup of coffee “after the place is cleaned and to do so with the hawkers present.”

This is the typical coward who hides behind the safety of a GRC, instead of facing the electorate on his own two feet in a SMC. It's not his style to settle scores with his adversary mano-a-mano, that's good reason why he carries a feminine sounding name. And the hawker he is dragging into the fracas?

The cyber patrol of conscientious netizens has uncovered the identity of the hawker representative who requested an independent contractor to quote for the "Provision of manpower, equipments, material, chemicals, insurance and supervision for the cleaning of entire premises, consisting of 40 market stalls." That hawker representative is a Mr Ng Kok Khim, representative of Market Association of Block 538, and a long standing PAP grassroots leader at PAP’s Kaki Bukit division. So long that he has been actually cited for a Long Service Award. The red herring quote was supplied by the unabashedly partisan NEA. For the record, Mr Ng has not been asking anyone for an apology for anything. The really nasty partisan types send out lawyer's letters of demand.

If only the febrile Balakrishnan would pause to review the documentation, he would be able to avoid digging himself a sinkhole big enough to swallow up his fulminating ego and his party's soiled public standing. And spend more time on the dengue crisis, now fast approaching 1,000 case a week. 9,544 people have fallen ill, two have died, and the minister for Environment and Water Resources is pandering to politics instead of cleaning up the environment of water borne diseases. 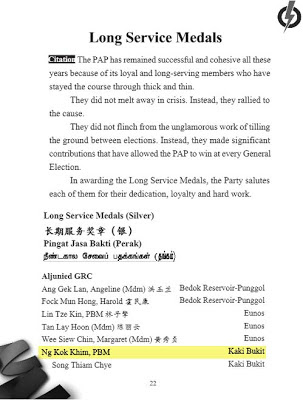