How Mistrust is Generated

Watching Acting Minister of Manpower Tan Chuan Jin on the Talking Point programme special reminds one of a book which has the full title, "Denialism, How Irrational Thinking Hinders Scientific Progress, Harms The Planet, And Threatens Our Lives." The despicable licensing of news sites is no rocket science, but Tan was definitely in full denial mode.

He repeated ad nausem there was nothing new to regulations already in place. Well, before 1 June 2013, there was no $50,000 dangling like the sword of damocles over sites that have a reach of 50,000 and offer at least one article per week on Singapore’s news and current affairs. And then there's the potential fine of up to $200,000 and/or 3 years in jail if the Media Development Authority (MDA) feels you are tardy in taking down the offending post within 24 hours. The lawyers' letters of demand, which has seen quite a bit of action, at least provides a longer time-frame to respond.

One caller phoning in asked point blank whether Tan is prepared to state on air that no blog site will ever need to be licensed. The cowardly general took evasive action behind the "until such point that we notify other sites" caveat emptor, choosing instead to keep all options open. His empty promises smack of the hypocrisy of 377A, which also promised a light touch. Like the duplicitous legislation of 377A, Tan is as good as criminalizing bloggers with a free spirit.

“First they came…” is the famous statement and provocative poem attributed to pastor Martin Niemöller (1892–1984), an indictment of the sloth of German intellectuals after the Nazis' rise to power and the subsequent purging of their chosen targets, group after group:


When the Nazis came for the communists,
I remained silent;
I was not a communist.

When they came for the Jews,
I remained silent;
I wasn't a Jew.

When they came for me,
there was no one left to speak out.


And you actually thought you were safe. Think again.

In "Denialism", New Yorker staff writer Michael Specter reveals that Americans have come to mistrust institutions. One guest on the Talking Point panel touched on a similar mistrust generated by MDA's obscene haste in railroading the licensing regime. The final tally at the end of the program: more than 70 percent felt the new licensing rule will limit online news content. 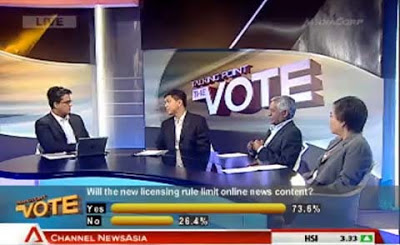