The Art Of Throwing Smoke 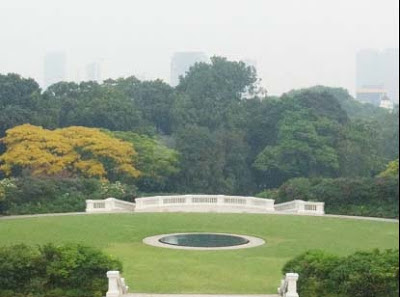 He was silent when the freedom of the internet was threatened by the likes of Yaacob Ibrahim.  He was just as quiet when the number of dengue cases crept past the 10,000 mark. He did not chime in when Vivian Balakrishnan waded into the hawker center scaffolding dissertation. So what keeps our prime minister awake at nights? Nobody would have guessed it was the beautiful view of the skyline from the Istana's manicured lawn, a sight none of us will ever get to see at the crack of dawn. Lee posted a Facebook photo of the haze taken at the Istana, commenting: "The city in the distance is barely visible. We are all affected by the haze."

At stake, of course, are the tourist arrivals, who had not planned to travel all the way to see the Merlion engulfed in smoke. Said national icon is permitted to spit 24/7 to its heart's content, but smoking is strictly prohibited. Some laws are simply not allowed to be applied with a light touch. Too bad the peasants have to put up with watery eyes, and coughing fits.

Instead of dialling up President of Indonesia Susilo Bambang Yudhoyono direct - and remind him how little he is paid for running a country of 247,496,843 people - Lee deputised Minister for the Environment and Water Resources Vivian Balakrishnan and Foreign Minister K. Shanmugam to call their Indonesian counterparts to register Singapore's "serious concerns" about the situation and to offer help to fight the fires there. Someone expressed hope that the experts can get together soon to compare notes on "what's happening and where, and what's being done." Every schoolboy in Singapore knows what's happening (farmers burning crops), where (Sumatra and akan datang, Kalimantan) and what's being done (zilch).

Balakrishnan, fresh from calling the Aljunied town council to name cleaning contractors, said in his own Facebook account that he asked Indonesian Minister Balthasar Kambuaya to name the companies responsible for the fires there causing the haze. For a guy who flopped at floods, danced around with dengue, the only thing he knows about clearing the haze is, as expected, pointing fingers at someone else.

The Asean Agreement on Transboundary Haze Pollution was signed in 2002, but Indonesia has yet to ratify it. Also not ratified is the extradition treaty with Indonesia, signed in 2007, because their House of Representatives refused to approve both the treaty and the defense agreement as a package. Indonesia's House Speaker Marzuki Alie had complained loudly about Singapore's request to be allowed to conduct military training within Indonesian territory in exchange for the extradition treaty. While the politicians quibble, the fires of Sumatra rage on.