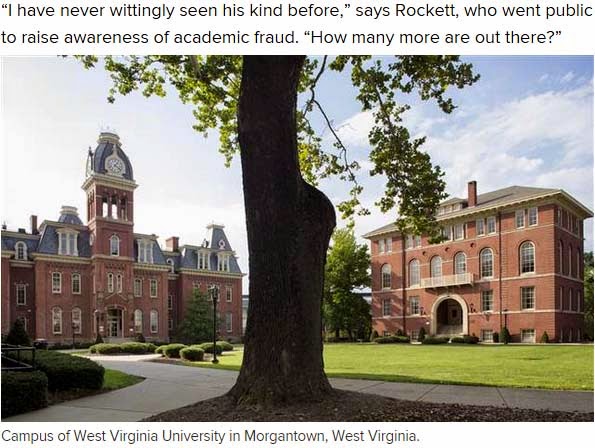 It was West Virginia University (WVU) who outed the fraudster, Anoop Shankar, former academic at the National University of Singapore (NUS). Shankar did not have a doctorate degree, and he did not graduate from the All India Institute of Medical Sciences in New Delhi as claimed in his resume. NUS confirmed that Shankar was employed as assistant professor with the Department of Community, Occupational and Family Medicine at NUS' Yong Loo Lin School of Medicine from 2005 to 2008.

All it takes is one bad apple to spoil the barrel, and that’s because the one apple that’s gone bad gives off ethylene, speeding the ripening of all the other apples in the same confine. But Shankar was not the only rotten fruit.

Thanks to an anonymous tip, in March 2011, the National University of Singapore (NUS) launched an investigation on one of its former scientists, the immunologist Alirio Melendez, for alleged research misconduct in two papers.

Melendez had joined NUS in 2001, and was awarded a prestigious "young researcher" accolade in 2007. In same year he moved to the University of Liverpool and the University of Glasgow in the UK, whilst maintaining his lab at Singapore until 2009. When the NUS investigation was still ongoing, Melendez resigned his position at Liverpool University in November 2011 (he was suspended from his role since April 2011, without prejudice, pending the outcome of the investigation). Glasgow University said it had concluded its own investigation in October 2011, but it was the university’s policy "not to comment on individual cases".

A blog called the Gigamole Diaries pointed out that the NUS deputy president connected to the investigation had co-authored two papers with Melendez:


"…the authorship list for Melendez papers reads almost like a Who’s Who in the medical school, and includes heads of departments, Vice Deans and prominent individuals in the office of the NUS Vice President. Interestingly Prof Barry Halliwell, who is NUS Deputy President (Research and Technology), and who has been cited as fronting the investigation into the Melendez publications is himself associated with at least 2 Melendez publications."


After 19 long months, the NUS in December 2012 finally reported that it had determined one of its former scientists, the immunologist Alirio Melendez, had committed “serious scientific misconduct”. The university found fabrication, falsification or plagiarism associated with 21 papers. It added that no evidence indicating that other co-authors were involved in the misconduct. But the university would not identify the papers retracted, nor release the report of the committee that investigated them. The list of retracted papers, a correction and an expression of concern, are available at Retraction Watch.

It's the same old story, what to do, done already. Please move on, nothing to see here. It’s “standard operating procedure” to sweep inconvenient truths under the carpet, so we’ll just keep doing things our way, thank you very much.

Just as Dr Intan Azura Binte Mokhtar spoke up in support of the carpetbagger Yang Yin, Associate Professor Koh Woon Puay of Duke-NUS Graduate Medical School maintains she has not found any reason to question Shankar's credentials, "Personally, I did not have any reason to suspect at that time that he was not trained in epidemiology or statistics to carry out his research." Koh is co-author of three papers they had worked on. One blogger explains the method for the madness:


"In the NUS, I am told, there is a scheme of apportioning glory and credit for scientific publications. This is for the purpose of chalking up points for promotions and other 'rewards'. The lead and the corresponding authors get 50% of the credit each. All the other co-authors stuck in between get 10% each. On this model, one published paper with a mass grave of 10 co-authors can chalk up a total of 180% credit."