The Sell Out Option

Somebody must have peed in their pants. The national library put the books back on the shelves, the housing board apologized before animal rights groups could bite, and now the Ministry of National Development (MND) is hastily revamping the lease buyback options. Haste makes waste, as suggested by the Century 21 CEO, "I thought the scheme is trying to support asset-rich cash-poor families. Why would a family with a household income of $8,000 to $10,000 a month be considered poor?"

That question came about in the light of the changes proposed for the unpopular lease buyback scheme, to be implemented only from April 2015. Plenty of time to get it right - so much for the general's boast about one shot one kill. So what's new?

More Eligible
- extended to 4-room flats, currently stopping at 5-room and private properties
- household income ceiling raised from $3,000 to $10,000, which is dirt poor compared to those planners drawing $100,000++ per month
More hard cash upfront
- top-up requirement for CPF Retirement Account reduced to half the prevailing Minimum Sum (MS), confirming full MS is going overboard
Variable Lease Period
- standard plain vanilla 30-year lease now available in 15-, 20-, 25-, 30-, or 35-year lease options. A household must have at least 20 years of lease to sell, and only 80+ seniors can select the minimum 15-year lease option. And you thought ordering a Starbucks coffee was complicated.

According to MND figures, 250,000 HDB flats are owned by seniors aged 55+, and 80 percent are fully paid. The lease buyback scheme is good only for those eligible participants who have reached the current CPF draw-down age of 63, so it's still guesswork how many of those public housing flats will be unloaded. The previous scheme had only 800 takers since its introduction in 2009. Also interesting is the fact that the original premise concerning flat ownership was about having a stake in our country to fight for. With so many aliens brought onboard, the will to defend that stake have been shakened to the core. 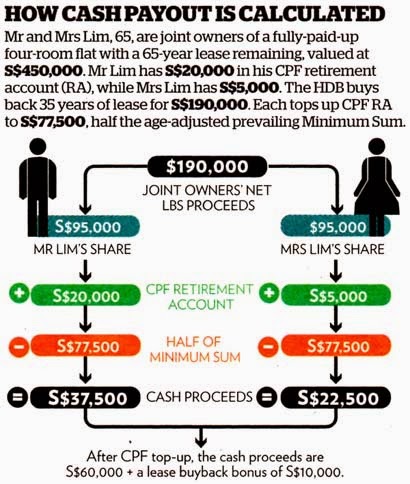