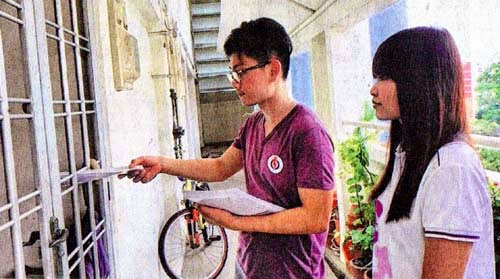 The provision for active election campaigning as permitted by law question is covered by the Parliamentary Elections Act (‘PEA’).

The term election advertising is defined in section 2(1) of the PEA as: “any poster, banner, notice, circular, handbill, illustration, article, advertisement or other material that can reasonably be regarded as intended —
(a) to promote or procure the electoral success at any election for one or more identifiable political parties, candidates or groups of candidates; or
(b) to otherwise enhance the standing of any such political parties, candidates or groups of candidates with the electorate in connection with any election, and such material shall be election advertising even though it can reasonably be regarded as intended to achieve any other purpose as well and even though it does not expressly mention the name of any political party or candidate…”

So has an election been called? Or did somebody finally kicked the bucket, precipitating an inconvenient by-election?

In a Facebook post, Victor Lye, PAP branch chairman for Bedok Reservoir-Punggol ward, proudly admitted that he was one of the PAP activists who busied themselves distributing anti-Workers Party flyers in Aljunied GRC, stuffing uninvited printed material indiscriminately into unsuspecting households.

PAP Paya Lebar branch chairman K Muralidaran Pillai has told reporters the aim is to target all 55,000 HDB units under the Aljunied-Hougang-Punggol East Town Council (AHPETC). Maybe he thinks that since the flyers do not carry the PAP logo, or say who printed them, he can be absolved of accountability or, when the shit hits the fan, he can simply claim he was misquoted.

Meanwhile the super efficient Singapore Police Force (SPF) has classified a case of anonymous anti-PAP flyers being distributed in Sengkang under the Sedition Act, by which an offender could be fined up to $5,000 and/or given a jail term of up to 3 years. David Attenborough has also just completed narrating the first Wild Life in Singapore episode for ChannelNewsAsia at 9 pm tonight. Looks like the wild life in the city just got wilder.