Laughter Is The Best Medicine

Kishore Mahbubani (former permanent representative to the UN who told the world "There are no homeless, destitute or starving people in Singapore. Poverty has been eradicated.") once wrote in his column in The Straits Times on December 13, 2014 that Singapore is not ready for a serious political cartoonist.


“Singapore is clearly not ready yet for a serious political cartoonist. However, we can try to encourage a culture of cartoonists by getting some of our leading citizens to allow themselves to be parodied. I am confident that some of our leading lights – like Tommy Koh and Chan Heng Chee, Ho Kwon Ping and Gerard Ee – would not object to being lampooned once in a while.”

Notice that Lim Chin Siong and the horrible person who cannot be named are not included. Which explains why Sonny Liew’s graphic novel "The Art of Charlie Chan Hock Chye" had to have a sticker plastered over the National Arts Council (NAC) logo in its first sold out 1,000 copies. Which should make the $34.90 Singapore variant of a manga a guaranteed collector's item.

Mr Khor Kok Wah (senior director, literary arts sector, National Arts Council) the Indian giver provided more graphic details for rescinding $6,400 of the $8,000 publication grant which had already been disbursed: “We had to withdraw the grant when the book The Art of Charlie Chan Hock Chye came out because its sensitive content, depicted in visuals and text, did not meet our funding conditions." Sensitive content meaning that when the 1987 Operation Spectrum, involving 16 young persons detained without trial allegedly over a Marxist conspiracy to overthrow the Government, is turned into a plot to replace all music in Singapore with the melodies of American singer Richard Marx, it's all too much for thin skinned folks who claim to be flame-proof. And found the kitchen getting too hot, so had to cool off in Hokkaido.

While waiting for the reprint which will be available in all good stores from 19 June, do browse the free book online by another cartoonist with sensitive content taking jibes at the nefarious Population White Paper whitewash. Enjoy. 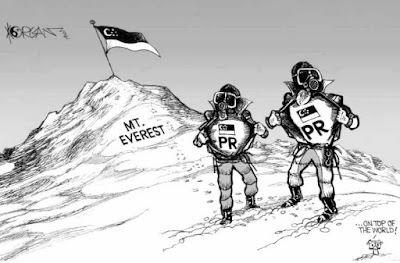