Getting Worked Up Over Numbers 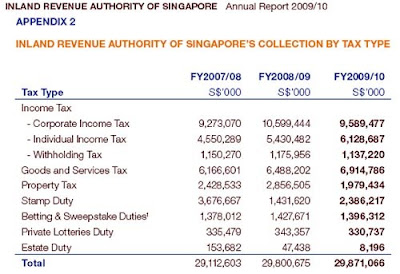 The headlines trumpeted in bold print that a record $29.9 billion in taxes were collected in Year of Assessment 2009/2010. Inland Revenue Authority of Singapore boasted that this was due to the shorter than expected economic downturn and a surprising buoyant property market (no thanks to Mah Bow Tan's personal mission to edge up property prices). Examining the data in the appendix, it appears IRAS collected 0.2 percent more than the $29.8 billion figure in 2009. And the amount of taxes collected the year before in 2008 was $29.1 billion, a difference of 2.3%, representing a ten-fold increase in FY2008/2009. So why all the excitement about this year's takings?

Corporate tax collection was down by about $1 billion, thanks to a tax rate reduction from 18% to 17%. But individual tax-payers paid "an all-time high" of $6.1 billion in income taxes. Here some tax experts say that the record individual income taxes collected was attributable to the addition of more than 81,000 new individual  taxpayers. So is this the heralded justification for jetting in plane loads of foreigners (including the so-called 1,305,000 "transients")?

Look at the numbers in the IRAS Annual Report 2009/2010 again. Residents paid $5.9 billion of individual income taxes, non-residents paid only $0.09 billion. Does it seem like one group is subsidising the other group in terms of housing, transport, education and other social amenities? 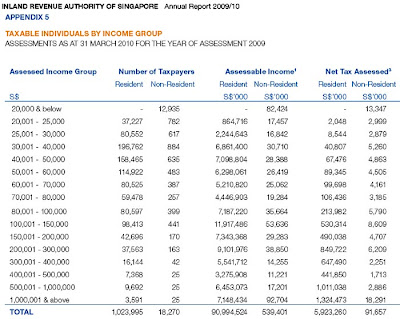 Without elaborating on how the process would work, Goh Chok Tong talked of his grand plan to approach the 500,000 PRs to become Singapore citizens, instead of taking up the suggestion of his Marine Parade resident that Employment Pass holders should take up citizenship. And as if to confirm his absolute disconnect with the ground, Goh is considering "a zero vehicular traffic growth" even as foreign talent Khoo Peng Beng (of Pinnacle@Duxton fame) outlined the horror of squeezing 6.5 million people on 710 sq km. Khoo's own words, "when you invent a design for living, you might also be inventing a series of other problems in life." That sums it up, their grand design, our myriad problems.
Posted by Tattler at 2:38 PM