For Want of A Better Name, StanChartGate?

Forced to come to terms with Watergate, Nixon told David Frost, "And so I can only say that in answer to your question that while technically I did not commit a crime, an impeachable offence - these are legalisms." As far as the handling of Watergate was concerned, he would only admit "it was so botched up, I made so many bad judgments."

Maybe the sentiments can be said of the MSM attempt to tar the netizens with "vicious comments" and "online vitriol", implying, of course, only they have access to the ugly truth.

But in this round, it looks like they kicked in their own goal. Their own investigative efforts only foraged out more dirt on the MP material. It turns out hubby Bernard Chan Teck Hock was served with a bankruptcy order but... 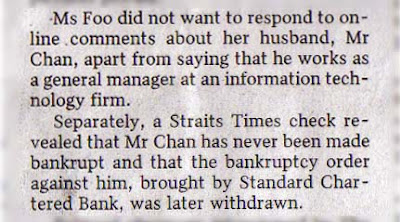 So why was the bankruptcy order withdrawn? Was Ms Foo such a powerful figure at the Standard Chartered Bank hierarchy? Worse, was StanChart given a directive by a higher up in the Cabinet to do the right thing (these too are legalisms)? Doubtless, the less restrained bloggers will have a field day with the more salacious variants - the blow by blow account will have to be rated R21. And you thought Clinton had it easy with the Monica Lewinsky disclosures.

The problem with people who don't bother with history, like the Janil Puthucheary who dismissed his father's incarceration as "something that... happened in the long history that we were told about", is that they never learned from the painful lessons either. And the bad judgements of the PAP will be repeated again in the future.
Posted by Tattler at 8:42 AM