The Gift Of Giving

Way back in 2007 when the peasants grumbled noisily about PM Lee's 25.5 percent salary hike from S$2.46 million to S$3.1 million a year, he tried to salvage his bruised moral authority by promising to donate the $600,000 to "worthy causes". Notably, the word "charity" was not used.

Apparently he kept his word for the past 5 years, or so we are told. This year it was revealed the money went to:
- a Community Initiatives Fund under the People's Association (S$200,0000);
- a new Prime Minister's Social Service Award ($$100,000);
- a Prime Minister's Valedictorian Award for the top student in each graduating cohort from the School of The Arts ($50,0000).

The balance of the money ($250,000), says he, will go to a range of community, grassroots, youth, arts and welfare organisations (details not provided).

In May 2009 it was reported that a Singapore Buddhist temple had received about $1.5 million dollars in cash from a mysterious donor, in stacks of $1,000 notes deposited monthly in the temple's donation box. The regular contributions to the Singapore Buddhist Lodge, a religious welfare group which is not politically affiliated, varied between $40,000 and $50,000. The lodge's chairman Lee Bock Guan said he was sure the money always came from the same unknown donor,"You know it is the same person, because the notes always come in the same, neat stack. By donating in cash, this person clearly prefers to be unknown."  The lodge has been providing free vegetarian meals to the less-privileged for more than 20 years, at a cost of nearly $210,000 each month. 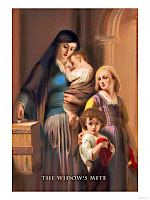 Easter is a good time to reflect on Sunday School stories. One in particular, The Widow's Mite, tells of a widow who donates two small coins (a mite being the least valuable coin available at the time), which was everything she had to her name, while the filthy rich gives only a small portion of their own wealth. The traditional interpretation of the morality tale is that the value of a gift is not accounted by how much is given, but by how much is kept back. And whether one makes a song and dance about the "act of generosity".
Posted by Tattler at 9:20 AM