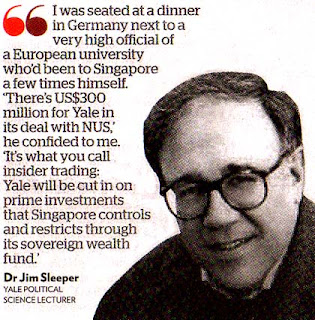 Why is Yale-NUS coming on so strong about the Huffington post by Yale political science lecturer Jim Sleeper? Yale University Press Secretary Tom Conroy is adamant Yale will not be getting any financial gain from the partnership with NUS, apart from reimbursement of expenses.  The NUS spokesperson parrots similar script,  "Yale University is reimbursed only for work done in connection with Yale-NUS College."

But both are not denying the fact that Yale trustee Dr Charles Ellis, and member of Yale Corporation, is currently an adviser emeritus to the Government of Singapore Investment Corporation's Investment Strategies Committee. [Please note corrections and updates kindly provided by Mr Sleeper below.]

Sleeper makes it clear: "My post does not say that there has been any agreement to allow Yale to participate in restricted investment opportunities. It merely quotes someone saying that he is convinced that that is a possibility." And that quote qualifies the potential financial gains for Yale as "what you call insider trading: Yale will be cut in on prime investments that Singapore controls and restricts through its sovereign wealth fund. These will be only investments, not payments, so there's some risk. But ... Yale's endowment will swell by several hundred million in consequence of its getting in on these ventures".

Insider trading has long been regarded as reprehensible as far as securities regulation is concerned in Singapore - it is worse than the extra egg that goes with the char kway teow, local parlance for justifying unsolicited discounts in condominium purchases. The main regulatory frame work is the Securities and Futures Act (SFA), which has replaced the repealed Securities Industries Act (SIA). The relevant Section 218 of the SFA lists the types of prohibited conduct by connected persons in possession of inside information. The most important of the provisions regulating insider trading is Section 219 of the SFA, which adopts an "information-connected" approach towards insider trading:


It is fair to conclude that someone, anyone, may be convinced that participation in restricted investment opportunities is a real possibility, given the unique position afforded to  Dr Charles Ellis as adviser emeritus to the GSIC Investment Strategies Committee. It is up to Dr Ellis to prove everyone wrong. Meanwhile, it would be pertinent to watch if Yale's endowment will be swelling by several hundred millions in the near future. As the idiom goes, forewarned is forearmed.