Improvements To Be Made

It now appears that an audience with the Queen of England is easier to arrange than an interview with Woffles Wu. The minister - maybe we should start calling him Mr SHAMugam - just provided the clue why the police has yet to determine the driver of his speeding car: they never got to ask the plastic surgeon the important question. Maybe the cops did, but the doctor thought it beneath his dignity to exchange words with a lowly paid civil servant. After all, not everyone has the privilege of the Law Minister batting for him. 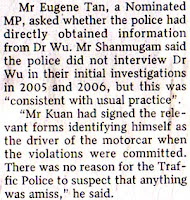 Responding to Nominated Member of Parliament Eugene Tan's tabled question, Shanmugam said Wu was not interviewed during initial investigations in 2005 and 2006 because Kuan  had identified himself as the driver. And the trusting cops simply took the word of one old guy without seeking collaborative evidence from other witnesses? Such as the addressee of the official government letter requesting particulars of the driver? Well, it looks like the procurement system is not the only standard operating procedure that is in dire need of improvement.

Shanmugam also disclosed for the first time that the speeding case of 2005 was reopened after "graft cops" received a tip-off in July 2009, and acted upon only in February 2010. The CPIB handed the hot potato to the traffic police in August after concluding no corrupt practices had transpired. In the context of current definition of the "c" word, we assume that no gratification was obtained or received. Whether Mont Blanc pens or Apple iPods count as much has yet to be decided in court.

Since only a few paragraphs of the 30 minute exchange with Sylvia Lim was reported in the mainstream media, we may never get to know what upset Shanmugam so much that he tried to pin her for implying the AGC had acted mala fide.That's highfalutin Latin for "undertaken in bad faith" or  the intentional or malicious refusal to perform some duty or contractual obligation. Ms Lim's original query was whether "public concerns about the equitability of the legal system" was addressed. The public is still waiting.