According to an article in the Economist ("The attraction of solitude", Aug 25th 2012),the single lifestyle is a growing force that cannot be ignored. 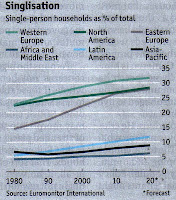 Even in traditionally conservative countries like the United Arab Emirates, 60 percent of women over 30 are unmarried. Half of American adults are unmarried, up from 22 percent in 1950. Nearly 15 percent live by themselves, up from 4 percent. The march of singledom is global. Research firm Euromonitor predicts that "singletons" will form the fastest growing household group in most parts of the world. It is anticipated 48 million new solo residents will be added by 2020, an increase of 20 percent.

In Singapore, most singletons are staying with their parents, primarily because their own housing needs have long been neglected. Only those above 35 are allowed to buy from the rip-off resale market. Like most policymakers worldwide, our planners also tend to ignore singletons, saving the best of tax incentives and housing grants for benefit of the married only.

Until now. Housing Minister Khaw Boon Wan has been tasked to "look actively" into whether singles should be allowed to buy built-to-order (BTO) flats directly from HDB. Unfortunately the camera did not zoom in on Khaw's face when the announcement was made. We'll never know if he was as surprised as the rest of the nation, whether concrete plans are in place or it was just nebulous promises in the style of Microsoft vaporware.

Thanks to the lack of specifics - the prime minister has this habit of palming off devilish details to his ministers - there is already ugly talk of setting limitations for singletons, e.g. smaller flat sizes, non-mature estates, second tier queues. While they are at it, why not bring back the Lee Kuan Yew suggestion of two electoral votes for the married, one vote for the singles? As Assoc Prof Straughan rightly put it, "housing is a basic need... you can't deny a Singaporean of a basic need just because they don't conform to the ideal family types."

The country is already divided over xenophobia and racial issues, do we need another fissure by discriminating against the singletons? Lest we forget, they do pay taxes, and the males have completed their national service obligations. And we don't mean by saving babies' lives in the hospital.