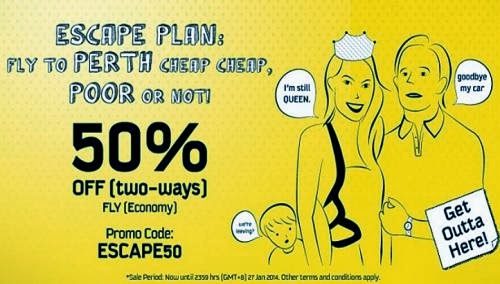 "Thank you awesome Scoot community for the overwhelming response. The Amazingly Cheap (AC) Escape to Perth sale sold out in half a day." - Scoot Facebook, 26 Jan 2014

Budget carrier Scoot's "Escape Plan: Fly to Perth Cheap Cheap, Poor or not!" promotional offer was quickly snapped up, faster than bak kwa sales at Chinatown, even though tar and feathers were not permitted as carry-on luggage.

The accompanying copy said it all: ""Hmm... we heard that Perth has become the destination of choice for an escape. So we decided to work overtime to bring you The great A.C Perth Escape Sale! (A.C for Amazingly Cheap of course.)"

200,000 Singaporeans were living overseas in 2012 – an increase of 27% from 2003. Of these 50,000 were staying in Australia. In 2013, one part-time banquet server with a Diploma in Tourism & Hospitality Management made plans to leave Singapore for greener pastures in Australia, and explained why:

"The many years of army reservist training and obligations staring down the barrel and the stiff competition (through the foreign talent programme) from skilled migrants in jobs and other areas, such as housing – are two factors. The fact that foreigners do not have National Service and reservist obligations but I do, makes me feel like a second-class citizen."

The speaker is no disgruntled wuss, he was honoured to be chosen as a torchbearer at the inaugural Youth Olympic Games. Push factor was the motivator:

"The Singapore government has already announced their “White Paper” at the beginning of this year. This means that they intend to increase the current population of 5.3 million people to 6.9 million by the year 2030. Singapore is such a very small country and the land is definitely insufficient to accommodate 6.9 million people! When 2030 comes, it will definitely be too crowded living here!"

Hmm... somebody may have the last laugh after all.