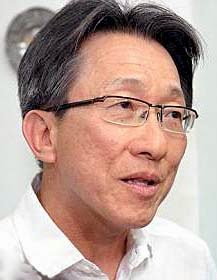 Trust Lim Swee Say to announce that he will be contesting in the East Coast GRC at the next general election, supposedly to implement plans he has for the ageing constituency. Only in Singapore, can an ageing politician simply declare he plans to be minister again, regardless of the wishes of the electorate.

Lim must be addicted to the high he gets each time he looks at his Central Provident Fund (CPF) account balance. "Some more, it's guaranteed," he gleefully told his audience. He may have to step down as union chief when he turns 62 in July 2016 - pursuant to a National Trade Union Congress (NTUC) constitutional change made in 2011 - but he still wants to keep collecting those million dollar cheques. You would expect an outgoing chief to endorse at least one of the 4 successors in waiting, but the selfish sycophant (synonyms: toady, creep, crawler, fawner, flatterer, flunkey, lickspittle, kowtower, obsequious person, minion, hanger-on, leech, puppet) would not volunteer a single word of support for Zainal Sapari (48), Patrick Tay (42), Ang Hin Kee (48) or Yeo Guat Kwang (52).

He did say earlier he would step down once a suitable replacement for his role is found. And what exactly is his role? Minister-without-portfolio implies good for nothing special, and changing the title to Minister in the Prime Minister's Office suggests he's just another useless appendage. As for distinguishing himself as resident jester in the court, the keechiu general has proved himself worthy of wearing that hat one time too many. Doing battle in every street corner, every cyberspace corner, be it in the mass media or social media, except in dicy quarters like Little India or being mired in the Anthony Casey saga.

Lee Hsien Loong shares his disrespect of the people's will, by giving Lim the ringing endorsement, "I haven't agreed to let him go". Someone should have made a police report when Lim pilfered toothpicks from the fancy Din Tai Fung Chinese restaurant - half a box is definitely more than reasonable use quantity. That would have taken the decision out of Lee's hands.

In one of his rare utterances without a grammatical error, Lim said, "In democratic societies, people give us their trust." Then he segued into what has to be a horrific rape of the democratic process, "If we look at votes as our ultimate goal and play politics, then we will fail eventually." That has to be the most sacrilegious assault of the ballot box, ever. Assuming, of course, that there was no hanky panky behind those empty ballot boxes for the  2011 Presidential Election.