Of Gods And Animals 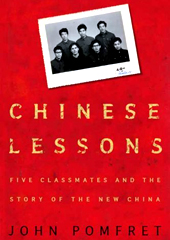 John Pomfret, Washington Post's bureau chief for Los Angeles, was one of the first American students admitted to Nanjing University in 1981. Narrating the stories of his classmates, he documented in "Chinese Lessons" (publisher: Henry Holt and Company, 2006) the travails of the Middle Kingdom from Mao's Great Leap forward to Deng Xiaoping's economic revival. As reporter for Associated Press he was booted out of China for associating with protesters at Tiananmen. The man was actually photographed with student leaders Wu'er Kaixi and Wang Dan, and the picture was displayed at a Ministry of Propaganda exhibition called "The Truth about the Beijing Turmoil".

Although fluent in Chinese, Pomfret admits, on page 235, that he was rarely treated as equal. He quotes Lu Xun, China's greatest twentieth-century writer, "The Chinese have two ways of looking at foreigners. We either look up to them as gods or down on them as animals." Pomfret says he enjoyed being treated like a god, even an animal, by Chinese women (lots of cross cultural dalliances in the book), but couldn't stomach it from the men.

Before xenophobia reared its ugly head, foreign workers coexisted peacefully with Singaporeans, except for the odd episode with the Serangoon Gardens dormitory. Filipina domestics stay with the same employer for as long as 16 years, and shipyards hire NTS (non-traditional source) workers routinely to handle the dirty, difficult and dangerous marine jobs - the dreaded 3 Ds. CEOs at top multinationals have always been worshipped as gods as early as Goh Keng Swee's pioneering industrialization days. Here we refer to expatriate representatives from Fortune 500 companies, although Nick Leeson in his heydays was similarly idolised at SIMEX before he broke the Barings bank.

But when the government opened the floodgates for IT staff from India, finance executives from the West, and academics from China (with barely passable command of the English language), all in the name of economic growth, congeniality became limited in supply. Not only were middle class jobs endangered, overcrowding on trains and public roadways pushed up costs. These arrivals grabbed from the same pool of affordable housing and COEs.

Ministers tried to paper over the issue by claiming that they are transients. After the casinos, MRT tunnels and other infrastructure are built, they will go home, and Singaporeans will have their country back. But the same bunch of Ministers are also saying they are needed to address the low fertility rate. Foreigners, if we are to believe them, are prolific breeders, and not just in the Year of the Rabbit.

Temperatures can only rise higher with Finance Minister Tharman's recent exposition that "the increase in foreign worker levies is not an attempt to get employers to substitute local workers for foreign ones". That was his response to a query at a post-Budget forum, asking why the hike in levies, which apply to employment pass and S-pass holders, do not apply to skilled foreign workers. Unionist Wilfred Thiang Singapore Maritime Officers' Union made sure the Minister understood the message: imposing a a levy on foreign professionals would boost the employment prospects of tertiary-educated Singaporeans. But Tharman is adamant that "It is going to be a process of winnowing out. Some will lose, others will win." Singaporeans will prefer to do the winnowing.