Too Hard To Swallow 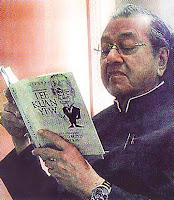 Critics of Tom Plate’s "Conversations with Lee Kuan Yew" said the journalistic instinct in him took a back seat when Lee dropped a bombshell, saying that three ministers quit because they could not accept Goh Chok Tong’s style soon after he took over as Prime Minister in 1990. There is nothing to show that Mr Plate asked the follow-up questions - Who were the three? What was it about Mr Goh’s style that the three didn’t like?

While Tom Plate deigned to nibble at the bait, Han Fook Kwang and his Gang of Six swallowed hook, line and sinker. Thus we have The Gospel According To Harry Lee: "When three ministers - Dr Tony Tan, Mr S. Dhanabalan and Dr Yeo Ning Hong - left the Cabinet between 1991 and 1994, shortly after Mr Goh Chok Tong took over as prime minister, Singaporeans were told only that they had asked to return to the private sector." According to Lee, the three ministers had resigned in quick succession because they "didn't take to (Mr Goh's) style".

Interviewed by Straits Times in Dec 1993, Yeo rubbished rumours of personality clashes, dismissing them as "foolish talk". Dhanabalan, in a rare commentary on why he left the Cabinet during a Q-and-A session with ST in Dec 2007, was downright coy, "All I would say is that I had differences which I felt I could not live with. Therefore, I thought it was best to step down and work with the leadership in other ways."

The truth was lurking somewhere in the National Day Rally speech on 17 Aug 2005, when outgoing  PM Goh Chok Tong spun a strange tale, "You may also have heard this old story about Loong...."

Goh was referring to the urban legend about Dhanabalan at the receiving end of an outstretched hand. One version has it that all three ministers, Dr Tony Tan, Mr S. Dhanabalan and Dr Yeo Ning Hong, left the meeting in a huff and tendered their resignation. Both Tony Tan and Yeo Ning Hong were subsequently persuaded to rescind their notices and continue their services. The fact that there's this new variant of the narrative out in print brings to mind the adage "where there's smoke, there's fire." Talking about his "Conversations" book with Mahathir, Tom Plate wrote, "I never felt he was lying to me, consciously, anyhow.... One could make allowances for honest gaps in memory,or even divergences of perspective; but not outright prevarication." So he did sense the difference between the two MMs.

Dr Ross Worthington's account does not mention Yeo Ning Hong, but details of the explosive altercation bear close resemblance. Unfortunately, in the light of Alan Shadrake's woes, it is unlikely Dr Ross will ever be in town to promote his book. You can find it in the National Library of Australia. There's one copy in the Lee Kong Chian Reference Library, but you can't borrow it.


In 1990, an incident occurred in a pre-cabinet meeting which was the beginning of entrenching further among the many in the core executive, resistance to Lee Hsien Loong's long term ambitions for prime ministership. Prior to this meeting Lee Hsien Loong had gone to the office of Richard Hu, the Minister of Finance, and removed a number of files without Hu's permission. At that time Lee's office was on the 48th floor of what is now Temasek Tower and Hu's was on the 50th floor.

At the pre-cabinet meeting Hu took Lee to task for doing this and was supported by Tony Tan. Lee's response was aggressive and insulting, he directly insulted Tan and Hu, a man of his father's age. This was a double insult to Hu, who was Lee's superior in cabinet and a person of an age who should of itself deserve respect in Chinese society. Suppiah Dhanabalan intervened and chastised Lee for his behaviour, demanding that he apologise to Hu, withdraw his remarks and not interfere in other minister's portfolios. A heated exchange occurred into which a number of other issues intruded and eventually Lee lost his temper, and reportedly reached across the table and slapped Dhanabalan across the face.

This caused an uproar in the cabinet and Lee was severely chastised by Goh Chok Tong. Dhanabalan stormed out of the room and did not return for some time. Lee, in response to a demand from Goh, subsequently apologised to Dhanabalan, Hu and Tan. Hu, Dhanabalan and Tan all initially stated that they would leave the cabinet as a result of this incident. Goh later took up the matter with Lee Kuan Yew who reportedly verbally thrashed his son over the matter.

This was apparently followed by a more sober, educational but equally critical assessment from Lee Hsien Loong's mother, a talented though background political adviser. Lee Kuan Yew reportedly met later that day with Hu, Tan and Dhanabalan, apologised for his son's behaviour and requested that they not resign, supported by a similar request from Goh Chok Tong.

All held out for some time, but eventually Hu agreed to stay, but Dhanabalan and Tan both resolved to leave. This they did the following August 1991 elections, all without a public word against Lee Hsien Loong, continuing to subscribe to the tenet of all secrets staying within the PAP family.