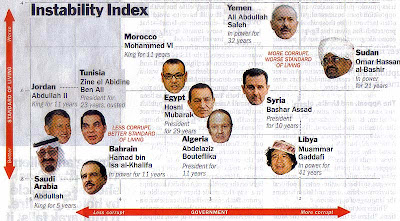 Commenting on the social unrest in Egypt, Foreign Minister George Yeo said, "I don't think that the event there would be so bad as to threaten the passage of ships through he Suez canal." We don't know what his choice of reading material is, but some publications are already declaring, "After Egypt and Tunisia, other governments in the Arab world are feeling the heat".

They are also saying that dictators like Mubarak, who had signaled he intended to run for a 6th term despite being 82 and in poor health, find it difficult to handle change because the structure of power they have set cannot respond to the new, dynamic demands from their people. So it was in Tunisia; so it was in Egypt. Spot the familiar seeds of discontent in the following quote:


"Over the past 5 years, the Mubarak regime has pursued an economic growth plan of rapid liberalisation, promising to deliver jobs and modernity in the process. Increasingly, however, Egyptians complain that unemployment is higher than ever, that the cost of living has risen while wages have stayed the same and that government corruption and repression have come to permeate all aspects of society." (TIME, 7 Feb 2011)

"That means that the region's so-called stability was an illusion," says Shadi Hamid, director of research at the Brookings Doha Center. "These regimes are not, in fact, stable and are going to fall - if not now, then later."

What is unique in Cairo is the behavior of the protesters calling for the resignation of Mubarak, which led Obama to cite their maturity and civic-mindedness as reasons for hope that Egypt will transcend from pharaohism to democracy. However, the decision to cut off mobile telephones, text messaging and the internet proved a turning point. "When you block the internet, you are asking the people to come down to the streets," said engineer Shawawi, "and anything can happen."

There are many lessons Singapore can learn from the unfolding events. When push comes to shove, like the Egyptians, long cowed by the heavy hand of Mubarak's police and intelligence forces, people will be heeding a crash course in protestation. Maybe material like their 26-page pamphlet titled "How To Protest Intelligently", with instructions on where to go, what slogans to chant and what to wear. Not exactly something to look forward to.
Posted by Tattler at 10:34 PM