Scrapping The Bottom Of The Barrel

That Mubarak has to be ejected from office by the outpouring of citizenry onto the streets is stark reminder that politics is a serious business. The battle for the minds of the common people should have been fought in the august house of parliament. To demean this hallowed institution with the presence of a second-rate artiste from Channel 8 is to defile the blood, sweat and tears of pioneer parliamentarians like Goh Keng Swee, S Rajaratnam, Devan Nair. Real men, not reel actors, some of whom have languished in jail like Mandela to wrestle freedom from the colonialists so that Singapore could be born.

Thanks to the personal endorsement of court jester Lim Swee Say, we had a one term nominated member of parliament who's lasting image was, and probably still is, that of a bimbo accessory on the Wheel Of Fortune television program. The forthcoming outrage also lends credence to speculation that Jack Neo the philanderer was actually in the running for the GRC sweepstakes. Why else would he have on hand the direct telephone number of Foreign Minister George Yeo? His casting couch victim wasn't one of those foreign crows from China who needed help with her multiple entry permit (salacious pun not intended).

In his saner days, here's what Lee Kuan Yew said of the Singapore parliamentary system:


"It's different from the American presidential system, where you say,'I'm a peanut farmer, vote for me,' and they did.
Here, you have got to win the confidence of your fellow MPs, who would have many years of sitting down listening to you, arguing with you and forming their conclusions of you."

Perhaps even the powers on high are tired of the charade perpetuated, and decided to make official the wayang sessions that is the current state of parliamentary debate. While they are at it, why not add a dash of eye candy? "Bobbi" the ex-stripper who choreographed the opening ceremony of the World Youth Olympics in Singapore on August 14 had her 5 minutes of fame - maybe she deserves a seat in parliament as well? 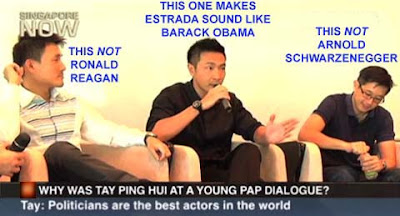