Meeting The Masses In Style

Popemobile (Italian: Papamobile) is an informal name for the specially designed motor vehicles used by the Pope during outdoor public appearances. The Popemobile was designed to allow the Pope to be more visible when greeting large crowds, not because he has ambulatory concerns. Pope John Paul II was the first to use a modified truck to greet supporters on his trip to Poland as the newly installed Pope.

The modified Mercedes-Benz M-Class sport utility vehicle Popemobile most often used by 265th and current Pope Benedict XVI when traveling abroad does not have a Warren Golf & Country Club sticker on the bonnet. But this version of transportation boasts of accoutrements that even the Popemobile does not have. 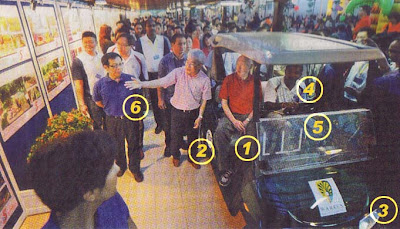 [1] - Electrical heating pads to soothe aching limbs, mobile variant of full time staff at Istana employed as hot towel dispensers
[2] - Extra buoyant flotation tyres in case of freak floods since it looks like Yaacob Ibrahim is still in charge of drainage systems
[3] - Proximity sensor for opposition members in the vicinity to avoid repeat of Goh Chok Tong - Chee Soon Juan style encounter, with latter badgering, "Where is the money Mr Goh?"
[4] - Token minority ethnic group driver, in full compliance with George Yeo's "less likely to riot" stipulation
[5] - Specially treated glass visor that turns dark at the flick of a switch, in case some precocious kid among the spectators yells out, "The Emperor has no clothes!"
[6] - World's most expensive jaga kereta - add Annual Allowance, Special Allowance, "Public Sector Leadership" Allowance, Annual Variable Component, Special Variable Payment, GDP Bonus, Performance Bonus - at a total cost to the taxpayer of 36 months' pay estimated in the region of $3 million a year. That explains why he still maintains HDB pricing is affordable.
Posted by Tattler at 3:39 PM