Of Mice And Men

On Saturday 12 March 2011, one day after northeast Japan was hit by a 9.0-magnitude earthquake, officers from the Urban Search and Rescue (USAR) contingent of the Singapore Civil Defence Force (codenamed Operation Lionheart) flew off on Flight SQ 12 to help with the rescue work.

SCDF said the five search specialists and five search dogs, led by Search Platoon Commander Major Tan Loo Ping, departed Japan on Wednesday morning 16 March. Minister of State for Home Affairs and Education Masagos Zulkifli, SCDF Commissioner Peter Lim and Japanese Ambassador to Singapore Mr Yoichi Suzuki were on site to receive the returning team on Thursday. Major Tan and three of the officers in the team for Japan were also part of the 55-man search and rescue team dispatched earlier to Christchurch, New Zealand, from 23 February to 6 March. In view of the shorter stint, perhaps the Japan junket should be renamed Operation Pussycat.

While thousands of people have been evacuated due to high risks of radiation near the Fukushima Daiichi nuclear plant, a small group of 180 workers are staying on at the risk of their lives to prevent a major meltdown. The group of nearly 200 technicians, reportedly labeled the Fukushima 50 because they work in shifts of 50, are likely being exposed to massive amounts of radiation. Monitoring at the Fukushima Daiichi site has recorded radiation as high as 400 millisieverts an hour -- a level known to be a risk to human health. These are modern day Kamikaze heroes, men and women willing to die for their nation. These are times that separate men from mice. 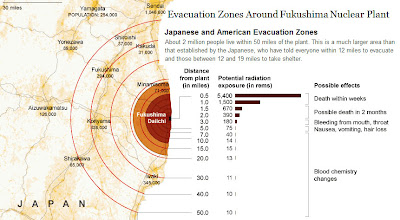