The Curious Case Of Dr M 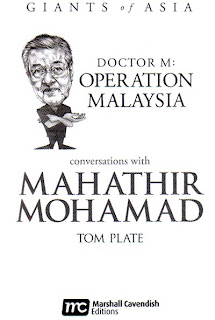 Strange, the conversation Tom Plate has with Mahathir Mohamad in his second "Giants of Asia" book seems to be one sided. In response to his 9 faxed questions in "Dr Mahathir Defines His Muslim Religion", MM answered 7 with single words.

Maybe the frustration with the "iron censorship curtain" on his delayed memoir, snipping stuff away on grounds of national security, was throttling his loquacious second nature. This is the man best remembered by the West for his rants, against Soros and against Jews, which Plate dedicated a whole chapter in "The Anti-Semitism Controversy Never Dies". Throughout the chapters, with James Bond themed headings ("Die Another Way" for the 9/11 conspiracy has to be pure bad taste), Plate was playing the apologist for someone who can clearly speak for himself, without mincing words. Like he telling the author "the old guy's still in the saddle". When Plate was stumped, he added, "LKY is still there. He never lets go. I let go. He is keeping a lid on the purse strings. He controls them."

Or maybe the powerful police unleashed in Operation Lalang of October 1987 to quell alleged ethnic tensions, sweeping up opposition leaders and social activists, shutting down newspapers, unnerved him (check "The Men With The Golden Guns"). In the earlier chapter, Plate was saying there's no chance of the police getting out of hand, "Well, you're not in jail." To which came the curious rejoinder, "Not quite." Unlike Mahathir, Lee Kuan Yew can cast racist aspersions with "we can integrate all religions and races except Islam" without fear of a knock on the door at an unearthly hour of the night. Not with the Home Affairs Minister, Wong Kan Seng or Shanmugam, under the heavy thumb of his son in charge.

Stranger still are the forward messages at the beginning of the book. Instead of the usual fawning platitudes, the contributors harp on the less palatable episodes of Mahathir's 22 year reign. Proton, Perwaja, Putrajaya, everything but the kitchen sink is mentioned. Irony of ironies, the scant praise is from his nemesis across the causeway, "He was an outstanding Prime Minister of Malaysia. During his premiership of over 20 years, he changed Malaysia from an agricultural, placid society into an industrial, dynamic society."

Tom Plate deflects the critics of his hero worship by asking the well honed questions, "Have you ever met Dr Mahathir/( Lee Kuan Yew)?", "Ever been to Malaysia/ (Singapore)?" He has, but that hasn't helped to pierce the enigma or the iconoclast. You know the conversation hits a cul-de-sac when the writer runs out of steam and end with, "Alright, because I'm going to go with that."
Posted by Tattler at 5:02 PM