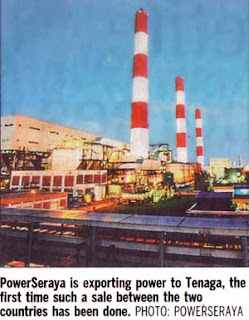 Buried in the back pages of Saturday's paper was a little known oddity that Singapore's PowerSeraya had been quietly selling surplus generation capacity to Malaysia. Apparently the Energy Market Authority had granted authority to export electricity until Wednesday June 15. EMA said the Government will consider any requests that may emerge for local firms to sell more electricity to Malaysia i.e. EMA intends to make more money.

Let's get this clear. Singapore power stations have excess production capacity over domestic demand. Surely you don't need Economics 101 to appreciate that should have led to a price decrease in electricity tariff!

Singapore's power stations were built over the decades with taxpayers' money. PowerSeraya was privatised and sold to Malaysia's YTL Power after a surprise"unsolicited proposal" for $3.8 billion in 2008, a week after Temasek Holdings had said it would shelve tender plans for PowerSeraya owing to "market conditions". YTL is Tan Sri Dato' Seri (Dr) Yeoh Tiong Lay, one of Mahathir's Chinese business cronies who made millions building B.O.O. (build own operate) and B.O.O.T. (build own operate transfer) power plants when Tenaga Nasional Berhard failed to deliver (and earned it's sobriquet "Total National Blackout"). YTL must have been so grateful for the Singapore deal it treated SR Nathan and his VVIP crowd to an Andrea Bocelli concert at Botanic Gardens (billed as "YTL Concert of Celebration 2010, Andrea Bocelli in Singapore"). The public were given limited lucky draw passes to sit on the wet grass, and car parks were strictly off limits to the hoi-polloi on that star studded evening.

According to EMA's numbers, Singapore's total power generation capacity is about 9,800 MW, while the peak demand is around 6,500 MW. Even if the money made from YTL was not filtered down to the public, you can see there's lots of leeway to reduce electricity tariff. Unless EMA thinks Singaporeans are too daft to understand the economics of supply and demand.
Posted by Tattler at 10:25 AM