When the headline says, "Singtel ups the ante", one assumes the biggest telco in town is achieving something worth crowing about. Instead, it simply confirms what is public knowledge: paying customers have been short changed for their internet access speeds.

The "typical speeds" of it's fastest mobile broadband plan - 21Mbps - could only manage 4.8Mbps at best, a far cry from their advertised claims. The small print says "The typical speed range was derived through an analysis of real user data over multiple 24-hour windows at various locations around Singapore, including major 3G hotspots." We are not told what broadband speed test was used for the findings.

The Numion website provides a very vigorous checkout. It measures surfspeeds inside Singapore and out (worldwide). The time to ping the server at Singtel's Exeter Road HQ is meaningless when you want to access CNN or BBC for the real news. Who wants to place their trust on a politically biased website?
The curiosity is that Consumer Association of Singapore (CASE) spokesman Seah Seng Choon does not seem to be bothered by the sub par performance, but simply chorussed the Singtel tune of being "a first for the mobile industry in Asia" to broadcast its pathetic delivery on promises. The other ISPs are probably holding off until they get their act together. In countries other than Singapore, false advertising is a magnet for law suits. Other countries, which can achieve mouth watering speeds such as illustrated below. 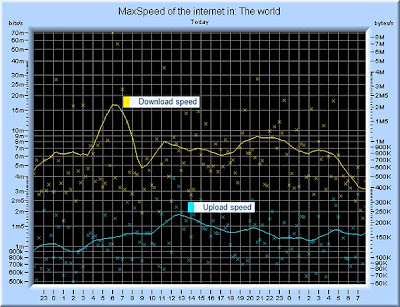