Singaporeans can pat themselves on the back. They know the meaning of hard earned money and how it should be applied to achieve maximum happiness.

A group of anonymous donors contributed some $250,000 through the Red Cross Society in support of the rehabilitation expenses for the Thai youngster who lost both her legs at the MRT station that lacked safety barriers. Another anonymous donor, Singaporean living in Hongkong, called Tan Tock Seng to offer to settle the estimated $46,000 hospital charges. We are told details of the transaction are still being worked out, but rest assured it won't be a $8 billing. Even Nitcharee Peneakchanasak's electric wheel chair was a gift from the Rotary E-Club of Singapore. And a well-wisher at the airport send off presented her with $800 in cash.

But discerning Singaporeans can also see how money can be better applied. Well, maybe 40% can.

PAP paid $4.2 million for the 82 seats they contested, while opposition parties expended $1.34 million for the fight. Lee Kuan Yew's Tanjong Pagar GRC blew $185,667.84 even though there was no fight, as their walkover was a hollow 35 second "victory". Notably Vivian Balakrishnan's Holland-Bukit Timah was second highest spender at $$204,746, a far cry from his YOG profligacy.

Where did the money go? PM Lee Hsien Loong's expenses in Ang Mo Kio included $163 for 90 boxes of Jacob's vegetable high calcium biscuits delivered to his Teck Ghee branch two days after parliament was dissolved (but before official campaigning started). Father Lee Kuan Yew's bill included $44 for buns (half coconut, half red bean paste) for helpers on Nomination day. These guys obviously never heard of out of pocket generosity. 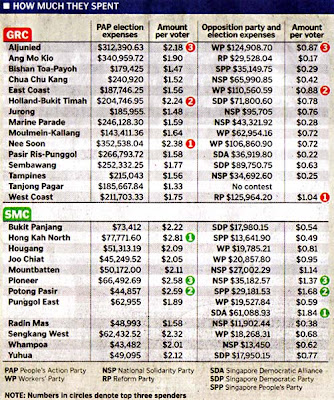