The Taming Of Saint George

The last word we heard from George Yeo was his Facebook post that said he was considering making a bid for the $4 million presidency, and taking two weeks’ off to "pray for wisdom". But after consulting "not only colleagues, friends and family members", he notably missed out waiting for divine guidance from above, and threw in the towel: “After considering all factors, I have come to the conclusion that, in this phase of my life, I can better contribute to the Singapore we all love in other ways. I have therefore decided not to run for the Presidency this August.” 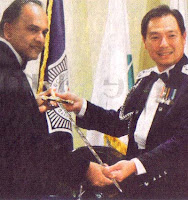 Did Jayakumar scare him off with his kendo wooden sword? Or was it the powerful "President has no role to advance his own policy agenda" follow-up admonishment from Law Minister Shanmugam and his Attorney General? Maybe it was the photo of the Minister being presented with a more wicked looking Temasek Sword by the Singapore Police Force.

Truth be told, the president's job is quite simple. Just zip your lips and look after the past reserves. Don't even bother to ask awkward questions like what is the difference between past, present and future reserves. When they wanted a $150 billion guarantee for bank deposits during the financial crisis circa 2008 S R Nathan just signed on the dotted line in a jiffy. He knew better than to query whether that sum represented 100% or 50% of our total sovereign wealth fund (SWF). That's why he knows he can look forward to another financially lucrative term should he decide to throw his hat into the ring - provided, of course, another blue-eyed boy is not lined up for the race.

Frankly, nobody quite understands what Yeo means when he says " I can better contribute to the Singapore we all love in other ways". He only way he knows how to "serve" Singapore is to be a yes-man. This guy, despite the reputed brainiac capacity, even spouts nonsensical p.c. stuff like "an IR is not a casino" just to suck it up to his political paymaster. George Yeo likes to quote his brother Jim's philosophy that "to succeed in life, one needs the 3 B’s. What are the 3 B’s? They are Brains, Balls and Breaks". Aljunied was a tough break, asking teeny boppers to collect the nomination forms on his behalf was brain-dead, and it looks like the cojones are missing when they are sorely needed.
Posted by Tattler at 8:49 AM