A Matter Of Credibility 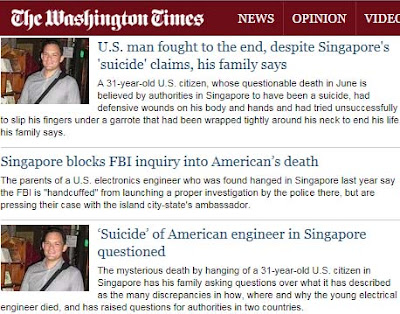 The death of Shane Todd, 31, an electrical engineer who worked for Singapore-based Institute for Microelectronics (IME), was treated by the Singapore Police Force (SPF) as suicide. Not so, says his family. Shane had defensive wounds on his body and hands, and bruised knuckles indicate he was trying unsuccessfully to slip his fingers under a garrote that could have ended his young and promising life.

Rick Todd, his father, told the Washington Times he “made it known” to Ashok Kumar Mirpuri, Singapore’s ambassador to the United States, that the family wants a full FBI investigation.
“We need there to be independent oversight [of the Singaporean police investigation] by an agency that we have confidence in,” he said, adding that police in Singapore “repeatedly lied” to the family about the circumstances of Shane’s death and about the progress of their investigation.

A SPF statement in February maintained that its procedures for investigating cases, in particular those involving deaths, are of high international standards. According to their report, Shane Todd allegedly hanged himself in the toilet of his apartment in Chinatown last year. Their spokesman claimed all unnatural death cases are investigated thoroughly and that police work closely with the pathologist and other relevant experts.

The parents of David Hartanto Widjaja, 21, weren't too satisfied either with the official investigation of their son's violent death in March 2009. The Nanyang Technological University (NTU) student was alleged to have knifed his supervisor who hailed from China, Associate Professor Chan Kap Luk, 45, in the back during a discussion in his office, and then slit his own wrists before fleeing and falling four floors to his death. When the shocked parents flew in from Indonesia, the crime scene was cleaned of all blood traces, and NTU had erased computer records associated with his son. It was as if David never existed.

Iwan Piliang, the head of a group formed by David’s parents and supporters, was upset the witnesses brought before the Coroner's Inquiry were “not to David’s advantage.” The group had wanted to meet with the NTU officials, but was not entertained. A similar request to meet Professor Chan, who was reported to have been wounded by David with a fruit knife missing a handle, was also rejected. The disturbing autopsy report that David’s family received documented 36 gaping wounds, of which 14 were from stab wounds.

“I, on behalf of David Hartanto Widjaja’s family, ask the (Indonesian) government to help David get the justice he deserves,” Piliang had said. “David’s death was part of a conspiracy.” But Jakarta Post quoted national police spokesman Abu Bakar Nataprawira as saying they were not able to investigate, as the death occurred in Singapore.

It looks like the SPF has to work on its international credibility.