A Policeman's Code Of Conduct

Why on earth is the Commissioner of Police blowing his own trumpet in nearly two full pages of the Sunday Times? Has it to do with global brand consultant FutureBrand that was appointed last August for 18-months and at an undisclosed price to taxpayers to polish up the image of the Singapore Police Force? Executive director Ms Sarah Reiter heading the McCann-Erickson WorldGroup consultancy was formerly chief of planning at Ogilvy in Jakarta. Ng Joo Hee, 43 when he was given the top job in 2010, said "FutureBrand is not the cheapest (of 8 bidders)" and had done work for Australian Federal Police and the United States Army. Their website boasts of Singapore clients like Jurong Town Corporation, Republic Polytechnic, International Sepak Takraw Federation, Asia Sports, Rotary Engineering, and Markono (formerly Kin Keong Printing Pte Ltd).

Ng itemises four areas that may have kept him awake at nights: Terrorism, loan shark harassment, molestation on public transport and "errant motorists". The last three definitely have been hitting the headlines recently, but hasn't Mas Selamat Kastari been locked away? While on the subject, when will we ever get to know how he made it across the Straits of Johore?

On paper, Ng makes a better by-election candidate than a colorectal surgeon. This guy has degrees from Oxford and Kennedy School of Government at Harvard. For the humble beginnings angle, we are told his parents were hawkers (running a sundry shop in Tanglin Halt). All we need is an uncle to help out in financing  renovation for his first HDB flat, and the branding exercise is complete.

Another lady, security consultant and former intelligence analyst Susan Sim, who has known (presumably not in the biblical sense of the word) the commissioner for more than 20 years, calls him "a warrior philosopher".

Then there's this curious bit of personal philosophy that sticks out. Apparently he encourages his MBA wielding commanders to "imagine having competition", his personal imagined competitors being Hong Kong Police, NYPD, Metropolitan Police in London, and the Shanghai police. Imagine internecine paranoia, an enemy in every corner office. 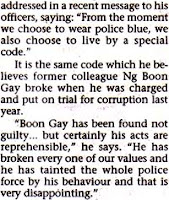 Then there's this curious bit about an unsolicited commentary on another law enforcer. "Boon Gay has been found not guilty... but certainly his acts are reprehensible," he says. "He has broken every one of our values and he has tainted the whole police force by his behavior and that is very disappointing." Wow, that's gotta be judge, jury and executioner pronouncement on a fellow officer who has been proven innocent by our legal system.

One year ago in January 2012, prime minister Lee Hsien Loong had said of former Central Narcotics Bureau Director Mr Ng Boon Gay and former Singapore Civil Defence Force Commissioner Mr Peter Lim, "If he did wrong, he must be punished; if he did nothing wrong, he must be exonerated." Even during those early days, there was loose talk both Ng and Lim were collateral damage of "friendly fire" from within the ranks. It must be tough to do your job, if you have to look over your shoulder while looking after the safety of the people.