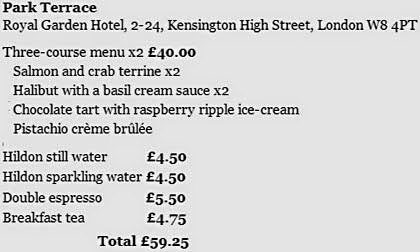 The Sunday Times printed in full the interview by Financial Times's chief foreign affairs columnist, Gideon Rachman. Except the menu for lunch at the Park Terrace of the Royal Garden Hotel in London, with prices indicated. Maybe they wanted to steer clear of Baey Yam Keng's gaffe with the $2.50 nasi padang meal plus bandung drink and Teo Chee Hean's $1.80 chicken rice.

The FT Rachman, obviously distracted by the delicious piece of grilled halibut and prime minister's pistachio crème brûlée - both largely untouched, it was noted - made an ill attempt at humour when he asked Lee if he always knew he would go into the family business, into politics.

When the guy who told pork chop soup on tap and free smoke at open windows jokes failed to respond in like vein, Rachman was rudely reminded that the PM has successfully extracted apologies and damages from media organisations, including the FT, for suggesting the Lee family has benefited from nepotism.

But humour at others' expense is par for the course. Racham wrote that the Japanese occupation of Singapore in the second world war, the west’s mishandling of the revolution in Ukraine, China’s fear of separatist movements and the bankruptcy of Iceland, all provoked an incongruous chuckle or a broad smile.

Still, the light banter provided invaluable inputs. Such as the day when the PAP is not running Singapore. “It could well happen,” he reportedly replied mildly. “I don’t know how it will work but it could happen.” Lee has told us on more than one occasion that 20/20 vision is not his forte. Maybe it was the effect of the pricey Hildon water - our own drinking water, if everything is going on as planned, by now should contain 5 percent sourced from the toilet bowl - as Lee went on to ruminate on the scenario of a coalition government, “It may not be one team in, one team out, it may be more complicated – you’re getting used to more complicated than that in Britain now.”

Taking cue from Lim Wee Kiat who reflected on his MH370 commentary and then made a grovelling U-turn, Lee is now saying that "a stable two-party system is naive." He clarified via Facebook post that the possibility of Singapore having a coalition government was not what he had in mind, what he meant was that there could be a day when the ruling People's Action Party (PAP) is no longer dominant. Now that's plenty to reflect about.

It's not just the housing shortage, rising health care costs - Singapore hospitals just hiked the A&E admission charges - and regular train breakdowns, dirty money is afloat. Asked if Lee has noticed an inflow of funds from Switzerland, the reply was, “I don’t know where the money comes from.” Rachman was making discrete reference to Singapore being discussed as the new safe harbour for footloose international money. That can't be a stable system in play.