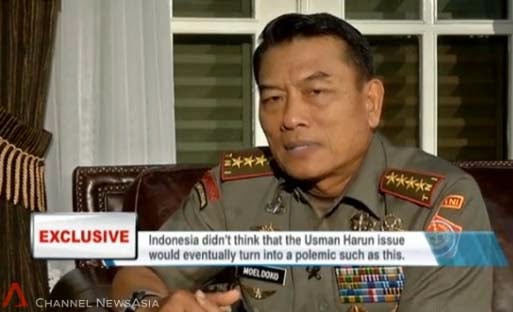 On Tuesday night, Channel NewsAsia (CNA) aired an exclusive interview with head of the Indonesian Armed Forces (TNI) General Moeldoko. His official Facebook page documented the remarks, "Once again I apologise. We have no ill intent whatsoever to stir emotions. Not at all. Second, relations between the two countries are on the mend. There've been communications among leaders. Singapore's Chief of Defence and I have spoken".

Quickly on Wednesday, Singapore's Defence Minister Ng Eng Hen - presumably the Singapore's Chief of Defence referred to in the interview - welcomed General Moeldoko's comments with much glee, and said the Singapore Armed Forces (SAF) will reciprocate by resuming bilateral cooperation with the TNI.

Then early on Thursday, General Moeldoko spoke to Indonesian media at the President's Office in Jakarta prior to the start of Cabinet proceedings to clarify his views. He made it quite clear that the apology had been for the fact that the decision to name the ship was final and would not be changed. To avoid further misunderstanding, the head of TNI's public affairs Fuad Basya confirmed in writing, "the TNI Commander was expressing his regrets that the naming was final and would not change."

Before the matter is finally laid to rest, one needs to understand what Ng meant when he said "The SAF will reciprocate General Moeldoko's positive intentions". If he interpreted the positive intentions to be renaming the Indonesian warship "Usman Harun" to "Usman Harun", there's nothing new to add. After all, Mah Bow Tan did commission global branding company Interbrand to rename "Marina Bay" to "Marina Bay", and it cost the taxpayers all of $400,000. We may need NSA's record of the Ng-Moeldoko conversation to settle this.

This say-something-first, clarify-something-else-later thingamajig comes in the wake of the Financial Times interview in London where the possibility of a coalition government in some future day was first recorded. When General Moeldoko said the episode has been a "learning process", he must be referring to the lessons culled from the prime minister's clarification thought process.