Laws Of The Jungle

The headline of a 21 October 2014 online post in the People's Daily, China's Communist Party mouth piece, captured Xi Jinping's place in history after only 2 years in office: "Mao Zedong made Chinese people stand up; Deng Xiaoping made Chinese people rich; Xi Jinping will make Chinese people strong." Our own version of an epitaph after 50 years pales by comparison: "Lee Kuan Yew got us kicked out of Malaysia; Goh Chok Tong merely kept the seat warm; Lee Hsien Loong dropped the ball." To be fair, the latter had his surgically removed.

Perhaps if the prime minister had studied law instead of mathematics, he would have recognised the shame of a nation when the law enforcement agency of the land refers you to to a third party for a legal position. If he's any good as his supporters claim, he should be able to make a million bucks in the lucrative business of providing private tuition in math.

Suddenly, it makes sense why the Thaipusam procession supporters were harassed by men in plain clothes, why the Hong Lim Park protestors were accosted by men in mufti. They themselves were uncertain if their thuggish tactics were legal in the first place; to put on a uniform would be justifying a farce. They were merely following orders blindly.

One former nominated member of parliament claims that the impartiality of the police force and the judiciary in Singapore are being questioned. We have to agree with Calvin Cheng that faith in our legal system and our police force underpins our hard-won social harmony and stability. The difficulty here is that the Singapore Police Force is seen to be washing their hands off the issue at hand. An issue which had a legal precedent in December 2010. Pontius Pilate could wash his hands off a bloody affair because he was not a Jew, but can a policeman really walk away from the law? 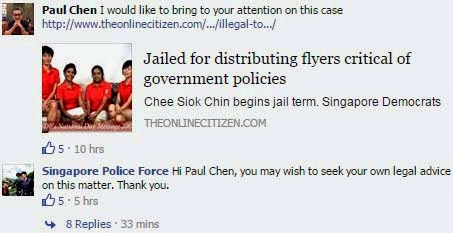