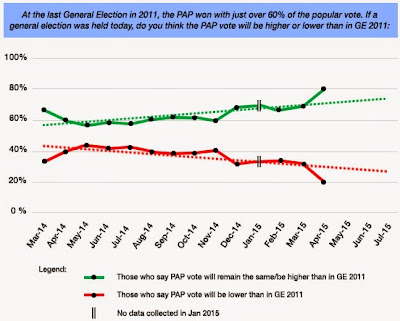 Astrologer Joan Quigley claimed in her memoir titled "What Does Joan Say?" that it was a question that the former president habitually asked Mrs Ronald Reagan. In an interview with “CBS Evening News” in 1989, after Reagan left office, Miss Quigley said that after reading the horoscope of the Soviet leader Mikhail S. Gorbachev, she concluded that he was intelligent and open to new ideas and persuaded Mrs Reagan to press her husband to abandon his view of the Soviet Union as an “evil empire.” If Nancy Reagan employing the services of a professional astrologer sounds a bit weird, she's not alone.

Someone else seems to be putting much faith in a third party researcher to shape the future of our country. Blackbox Research's "YouKnowAnot" bulletin of April 2015 has been quoted as saying, "Our survey findings indicate that current community sentiment points to much greater prospects for an early election."

The interesting factoid is that Blackbox reported that "overall satisfaction with the Government has risen eight points from a year ago." While not exactly annus horribilis, the past year has hardly been smooth sailing, so that finding has to be debatable.

Senior Minister of State for Education Indranee Rajah seems less optimistic, sharing that “I don’t speculate on outcomes and things like that. As you can see in the British elections, one should not really try to second guess what will happen."

Whatever happens, the prime minister has told the media that, apropos of speculation about timing of the General Election that must be held before January 2017, "the baby has already been conceived earlier on." If the choice of analogy is accurate, the nine month clock has started ticking. As any mother knows, the outcome can be a successful birth or end in tragedy, such as a spontaneous expulsion of the fetus due to unforeseen developments. Even Nostradamus would hesitate to bet on a blackbox.