Cappadocia is real old. The earliest record of the name of Cappadocia dates from the late 6th century BC. It appears in the biblical account given in the book of Acts 2:9. The Cappadocians were named as one group hearing the Gospel account from Galileans in their own language on the day of Pentecost.

Cappadocia is big. The relief consists of a high plateau exceeding 1000 m in altitude, an area approximately 400 km east–west and 250 km north–south. It is pierced by volcanic peaks, with Mount Erciyes (ancient Argaeus) being the tallest at 3916 m.

Cappadocia is awesome. Sedimentary rocks formed in lakes and streams and ignimbrite deposits that erupted from ancient volcanoes eroded into a fairy tale landscape of cones, pillars, pinnacles, mushrooms, and chimneys. People have long utilised the region's soft stone, seeking shelter underground and carving out living quarters, places of worship, stables, and storehouses.

Cappadocia is famous. The region was used for the 1989 science fiction film "Slipstream" to depict a cult of wind worshippers. In 2010 and early 2011, the film "Ghost Rider: Spirit of Vengeance" was also filmed in the Cappadocia region. The panoramas of Cappadocia are featured prominently in the cinematography of "Winter Sleep" (Turkish: Kış Uykusu), the 2014 film directed by Nuri Bilge Ceylan, and winner of the Palme d'Or at the 2014 Cannes film festival.

Cappadocia is a world heritage site. The Singappore Botanic Gardens, the picnic grounds of filipino domestics, also wants to be a UNESCO World Heritage Site. Liddat how to compete?

The best way to take in the spectacular panorama of Cappadocia is to go up in a hot air balloon. The only bitch is that wifi is not available at that altitude. Hence, blogging will have to take a backseat in the coming days. 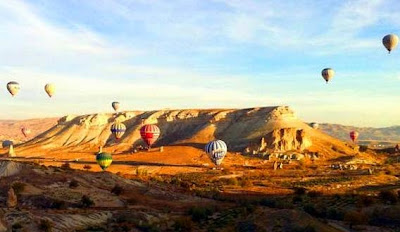