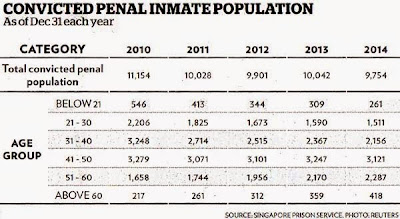 This is the kind of statistics that set you wondering. Of the convicted penal inmate population languishing in Singapore jails, some 27.7 percent are aged 51 and older as of 31 December 2014, a significant jump from the 16.8 percent of 2010. The figures for younger folk, of ages 50 and below, are lower, indicating a healthier downward decline. For sanity's sake, let's assume our youngsters are better behaved, and not that they can better afford clever lawyers.

The assistant director of the Prisons' building management department would only comment on the additional facilities required by elderly inmates, justifying the invitation to tender for grab-bars, hand-rails, self-closing taps and other senior citizen friendly enhancements to be installed in the jail cells. We are not told why more old folks are being locked up. Were they arrested for not having the prerequisite licence to collect cardboard from used cartons or selling tissue paper from table to table? Were they put away because they missed a town council tariff and lacked the cash for the fine? Here's a thought to keep you awake nights: are they preparing for a tsunami of silver haired inmates who are too destitute to afford the inflated Medishield Life premiums?

Instead of dwelling on the hardware aspects of the penal infrastructure, the associate director of one legal firm urged the authorities to allow for more "age- appropriate sentences" and early release for senior inmates with low risk of re-offending. Instead of locking up everyone at the slightest whim - the way they sweep up all the beggars and cart them to Pelangi Village to present the false facade of a youthful nation - they should ask themselves if prison is the right place to visit Ah Kong.