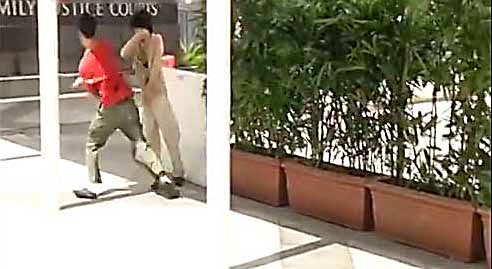 One may fault the female A*STAR researcher for walking a dimly lit path unescorted, but nobody could imagine a child would be assaulted in front of the Family Justice Courts building. In broad daylight, in the vicinity of the subordinate courts complex where uniformed policemen are usually milling around. And then there're the scum bags who give paparazzi a bad name, neither rendering assistance to the victim or giving chase after the assailant.

From whence did law and order descend to such a hellish state in safe haven of Singapore? Some may trace it all the way back to when a heavy hand was laid on the cheek of Dhanabalan, the gory account of which is found on page 150 of Ross Worthington's book, "Governance in Singapore", available at the Lee Kong Chian reference library. Others may point towards the lack of action from the Singapore Police Force, despite multiple reports already filed against one Jason Tan, the politically protected advocate of child abuse. And it looks like he's getting away with his brand of violence too.

Even the taciturn Minister of Law had to draw a line on the brazen attack.


"Amos Yee was assaulted as he was going to court today. That is quite unacceptable.
Rule of Law means respecting the legal process. If everyone starts taking the law into his or her own hands, then we will no longer be a civilised society."


The prime minister may make political mileage out of advocating stronger action against the ISIS at the 26th ASEAN Summit in Kuala Lumpur, but the real terror is already in town.