District Judge Siva Shanmugam and Deputy Public Prosecutor Tan Ken Hwee were understandably miffed when the court heard that the Deputy Director of Corrupt Practices Investigation Bureau (CPIB) Teng Khee Fatt may have his own agenda in the case against former Central Narcotics Bureau (CNB) chief Ng Boon Gay. Latter's defense counsel Tan Chee Meng was accused of "casting aspersion" on the integrity of the CPIB, specifically by mentioning that somebody was "bent on proving charges" against Ng. All these guys (save the lawyer in private practice) are civil servants of the same cloth.  Watching them go at each other like fighting cocks engaged in illegal blood sport is such sweet theater. Will the CPIB ever be investigated for corrupt practices?
CPIB's Teng could simply stop filing investigation details when he felt like it, even though there's a law mandating police officers to do so. Maybe that law applies only to the rank and file members, not Deputy Directors. Challenged about  an entry concerning a witness being willing to take a polygraph test, Teng's dismissed the incongruence with: "I left out the 'not'." Leaving us to believe it was just another honest mistake in the everyday life of a law enforcement officer. The court should make Teng take the polygraph test on this. 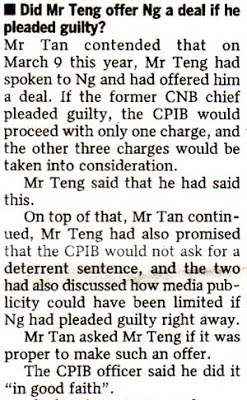 What is real maddening is the deal making that goes on in his office. Teng confirms this (see left clipping). Worse, Teng seems emboldened to change the course of justice to suit his personal predilection, or maybe that's the new normal in our judicial system. But who would have known that the CPIB has the authority to direct how the mainstream media should put the spin on this major case of corruption in the upper echelons of civil service?

A friend was once interviewed for some minor infringement, and the investigating officer assured him he would be given a warning letter. Imagine the shock when same officer informed him later that his superior overruled the official recommendation and insisted on a charge. After months, and lots of lawyer monies, the charge was dropped. All because somebody wanted to play God. That's why sometimes boys in blue are as odious as men in white.