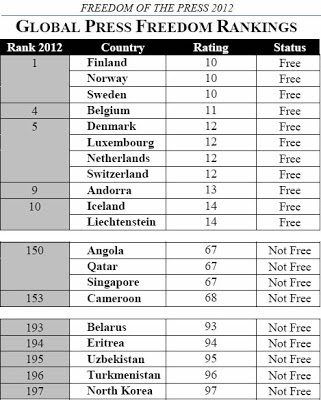 Freedom House ranks each country with a scoring system based on a scale of 0 to 100, a combined score of 0-30=Free, 31-60=Partly Free, 61-100=Not Free. Their studies are premised on Article 19 of the Universal Declaration of Human Rights which states:


Everyone has the right to freedom of opinion and expression; this right includes freedom to hold opinions without interference and to seek, receive, and impart information and ideas through any media regardless of frontiers.


According to the findings of "Freedom of the Press 2012: A Global Survey of Media Independence", the latest edition of an annual index published by Freedom House since 1980, Singapore is ranked 150. Of the 197 countries and territories assessed during 2011, including the new country of South Sudan, a total of 66 (33.5 percent) were rated Free, 72 (36.5 percent) were rated Partly Free, and 59 (30 percent) were rated Not Free.

It is reported that press freedom continued to face obstacles and reversals in many parts of the world. China, reputedly the country with the world’s most sophisticated system of media repression, stepped up its drive to control both old and new sources of news and information through arrests and censorship. Other authoritarian powers—such as Russia, Iran, and Venezuela—resorted to a variety of techniques to maintain a tight grip on the media, detaining some press critics, closing down media outlets and blogs, and bringing libel or defamation suits against journalists. Been there, done that. The brass knuckles tactics used in our own country are well documented in Francis Seow's book, "The Media Enthralled: Singapore Revisited". For a recent reminder of the bad old days, author James Minchin was turned away at the Changi Airport on arrival. It is no coincidence that China is sending a team to study our methods of governance. Speaking at the Communist Party’s Central Party School in September, Prime Minister Lee Hsien Loong said the two governments had “shared experiences on managing the social media.”

Straits Times (ST)'s surprise disclosure about Alvin Tan being stripped of his scholarship - he did not have to pay a single cent, and he wasn't expelled - went against the flow of Education Minister Heng Swee Keat's stubborn support of the university management's "need to respect its policy of confidentiality." Quoting an anonymous source, the gutsy ST revelation must have been a desperate attempt to improve its World Press Freedom Index rating, which used to be 141 before dropping to 144 in 2008.