Tony Blair apparently has his detractors, and his memoir "A Journey" was a feeding frenzy for those unaffected by his personal charms. But a movie alluding that he was duped all along?

"The Ghost Writer" is about a successful British ghostwriter (Ewan McGregor) attempting to to complete the memoirs of former British Prime Minister Adam Lang. Cutting to the chase, the ghostwriter discovers that Lang's wife Ruth was recruited as a CIA agent by a Professor Paul Emmett of Harvard University. The longsuffering politician's wife had surreptitiously shaped PM Lang's every political decision to benefit the United States as directed by the CIA.

As in the Robert Harris novel ("The Ghost") the movie was adapted from, the character of Adam Lang is a thinly veiled portrait of former British Prime Minister Tony Blair. Even BBC notes that the character "was inspired by Tony Blair", and that "the ghost of Tony Blair ... haunts the fictional Mr Lang, with references to Iraq, the 'war on terror', and a much too cozy relationship with the United States". Actors playing Foreign Secretary Richard Rycart and the US Secretary of State bear startling resemblance to their real-life counterparts, Robin Cook and Condoleezza Rice, respectively.

Okay, that had to be imagination given free rein by Hollywood, and conspiracy inspired Roman Polanski, the producer-director. Then I came across this: 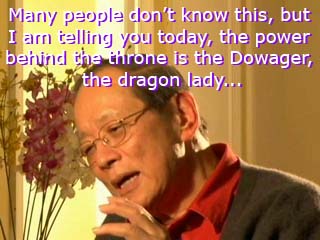 Aw, c'mon, give it a rest! Remember the last words Coca-Cola president Donald Keough said about the New Coke saga? "We're not that dumb, and we're not that smart."

If you are not scared about growing old by now, you should be.
Posted by Tattler at 6:43 AM