A Must Have Collectible 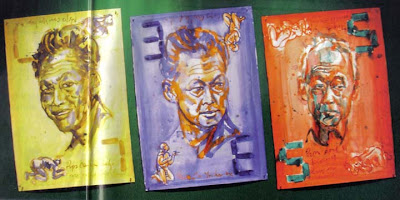 British author Alan Shadrake ("Once A Jolly Hangman: Singapore Justice in the Dock"), is in court for scandalising the judiciary. Yet a greater crime has been exposed in Newsweek (25 October 2010), one of planet Earth's largest news magazines with a world wide circulation exceeding 3.5 million in 2003, mocking the revered image of the State's founding patriach.

Singaporean Jimmy Ong, safely ensconced in New York and out of reach of the long arms of the law, shows off his watercolor of a gaming table with three playing cards, each depicting a caricature of MM Lee Kuan Yew. Yellow card has a small prostrate figure on hands and knees, pleading "Papa, can you help me not to be frightened?" Second Purplish card has a squatting figure and MM is turning smile to scowl, ignoring the plaintive cry, "Papa, don't you know I have no choice?" For the third Red card the little guy is obviously starkers and "assuming the position" - and it is clearly not the missionary style. Horror of horrors, MM is now painted with a contented smirk, and the little fellow is covering his face with both hands in abject shame.

The people at Media Development Authority must be slipping. They interrupted a private showing of the video "One Nation Under Lee" at Peninsular Excelsior but they missed out on the big one. More embarassing, when asked to pay for an entrance ticket, the MDA called in the police "for assistance". Gallery owner Valentine Willie confirmed that the use any cabinet minister's image requires approval from the MDA. Willie acknowledged that at his recent exhibition, he did not seek any permission nor did he encounter any problems from the authority.

Perhaps MDA no longer accords MM the same adulation as a cabinet minister, and is treating him as a mascot, the curious description used by PM Lee in the last Charlie Rose interview. What an outrage, "founding father" MM Lee relegated to the level of adoration of a YOG plush toy giveaway. Someone's head gotta roll for this one.
Posted by Tattler at 12:25 AM