Even Dogs Hate Him 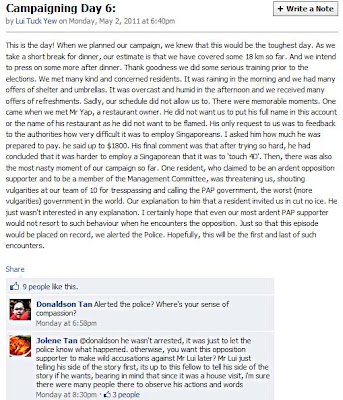 Read all about it! Minister booted out (of condo)!

On campaigning Day 7, according to Lui Tuck Yew's Facebook wall, the dogs chewed him out.


"My election agent and I were both nipped by a couple of small dogs. Fortunately, nothing serious as they only made a couple of small holes in our pants. Our volunteers concluded that the two dogs were not pro-PAP".

That wasn't nice, referring to the opposition as dogs. Wait till the SPCA hears about this.

But then they ran into some really nasty customers:


"Then, there was also the most nasty moment of our campaign so far. One resident, who claimed to be an ardent opposition supporter and to be a member of the Management Committee, was threatening us, shouting vulgarities at our team of 10 for tresspassing and calling the PAP government, the worst (more vulgarities) government in the world. Our explanation to him that a resident invited us in cut no ice. He just wasn't interested in any explanation. I certainly hope that even our most ardent PAP supporter would not resort to such behaviour when he encounters the opposition. Just so that this episode would be placed on record, we alerted the Police. Hopefully, this will be the first and last of such encounters."

Donaldson Tan asked the obvious question: "Alerted the police? Where's your sense of compassion?" Hello, after Lim Hwee Hua's treatment of the mentally disadvantaged youth who was upset about the treatment dished out to his mother, which they are now denying like crazy, you should be thankful Lui didn't send in the S.W.A.T. team.
Posted by Tattler at 3:08 PM